now, let us see u play it

Though I might get around to putting me playing Amazing Grace up somewhere, I was thinking about making a soundcloud or something anyway.

put up amazing grace, though i can't help u much if i can't see your playing

Wow, nearly didn't recognize you there.

I'll see what I get around to when I'm done with my exam.

haha, i am soooooo changeable! it is a weakness of mine, but to be fair, it is my only weakness

Should I be expecting some cryptic mobile phone message? 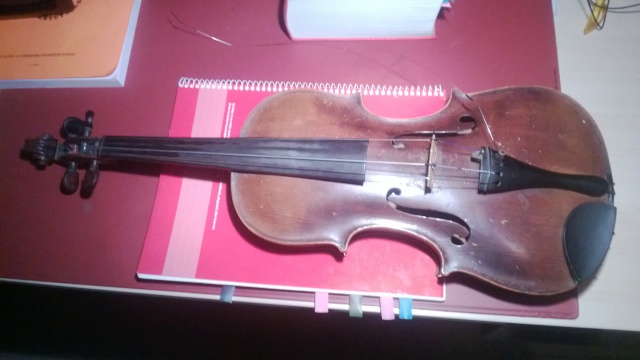 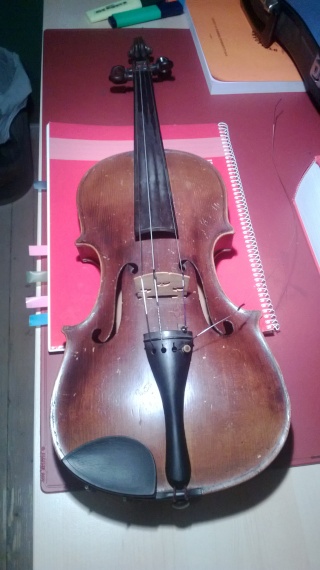 The broken string is rather apparent.

it certainly has been played on

an u take a picture from the side too ? it looks much deeper than the average violin..

Of course I can. 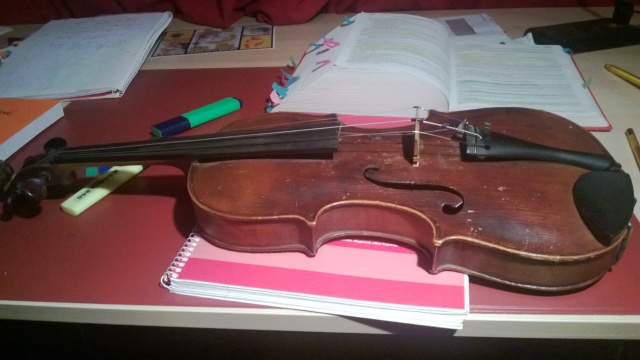 I'm glad you guys liked it.

It used to belong to my grandfather who played violin, but that I sadly never got to meet. So it's certainly been played. I think my father put it in playable condition not too long ago, but he never really got around to playing it.

I got a bit inspired by a couple of things, and you as well Nora

, so thought I'd give it a go. And I've really enjoyed it.

I thought you were vying for the "fjordlandian translation" category at the awards.

I'm sure you know what it means.

yes, that was what i meant blue

it looked as it was a little askew

i suddenly realised my bridge had become really leaned over, probably because i had just fitted fine tuners to it and it was a long time since i had played the violin. anyhow, i am glad i fixed it before it broke/shot out because the fine-tuners(pegs) are resting on it and if it brakes it can snap nice little marks in the violin, and i don't want that.

I'm glad I don't pick up on those kinds of double entendres.

Great, I was kind of afraid it requiered a bigger fix. Will get around to it.

Fine tuners do sound great though, because tuning the damn thing..

Actually, I know just what you're talking about. I have like a free bridge on my guitar as well and that fell off once ... during a concert. That was a shock I will tell you.

Would you still say it's deeper than the average violin?

no, it's just a minor thing, it makes it easier to tune too..
well, there are many opinions on fine tuners and not though. some say they reduce the sound because it makes it "heavier" while some doesn't mind, because it is better to be able to tune it without so much trouble.

i can't say if it's deeper, because the new photo isn't totally on the side. is there any writing inside the violin? (look inside the f-holes)

I had no idea I was saying such things.

Here are two more pictures if it's of any help. 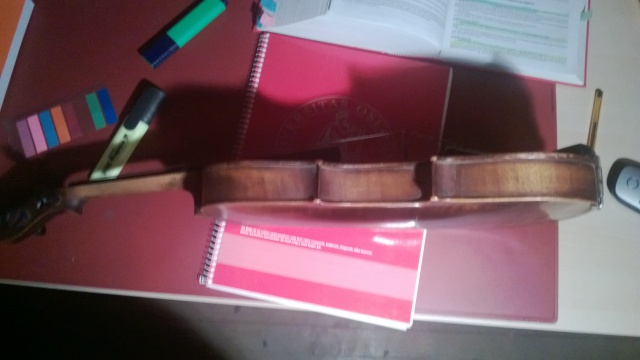 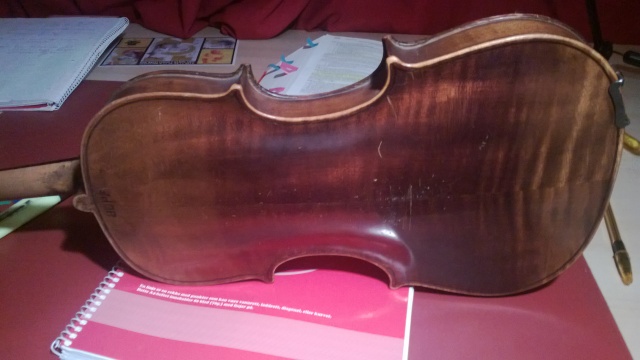 OMG! DON'T BALANCE IT LIKE THAT ARE U CRAZY!

ok.. no it's not much deeper than normal, it just looked like that because of the light

it looks like a nice instrument, although i haven't heard it

It does look a bit precarious doesn't it.

Though it wasn't really.

I put it there while sitting down, it was perfectly balanced and I only stepped back two centimeters for a second so my feet wouldn't show up in the picture.

I'll have a lot of time from about the middle of next week. I'll see what I can get around to.

I felt like contributing to the discussion, but as I know nothing about violins and classical music, a smiley will have to suffice

Be aware I don't know all that much about violins either.

I went looking for one as well, but all I could find was this:

Had another look at the violin. I tuned the three remaining strings up and moved the bridge as in the video. So easy. Thanks for the advice.

Now I just have to get around to buying some new strings.

i have a stradivarius copy made in DDR

and with steel strings it is rather loud hehe

As far as I could find out online Hopf was a german violin making family who's violins are now mainly used by Bluegrass players because of their sound. The one I have is probably a cheaper copy though.

"Good learners instruments," it said. "But not for concerts."

learn the instrument then