got banned from TORn, called Altaira a bitch.

well.. what did u expect?

Yeah, as came up in one of these threads yesterday, calling admins names will usually earn you a very quick ticket to bansville.

I was very nice and polite.

until they pushed my stroppy button

I would never call YOU a bitch Eldo. I know my place.

twat, tosser, asshole and prick would be more appropriate

(((I could think it though, and these encryptions are rock solid

Pettytyrant101 wrote:Is there a cultural reason the beats are so simple in terms of making them?
For example punk chords came about from an inability of the angry youth to play anything too tricky, so the basic sound of punk was in part due to musical illiteracy among the poor and working class expressing the sentiments of punk.
I was just wondering if part of raps growth was down to you only needing someone capable of creating a beat noise and someone to do the lyrics.
It strikes me as a poor mans necessity. So poor you dont even need instruments.

I'm not especially familiar with the origins of hip hop, but it definitely originated in low-income areas and reflected its environment.  It was also originally (and often still is) music for partying and dancing though.  Hip hop DJing began when in 1973 one guy (DJ Kool Herc) got the idea to isolate just a few grooves from an entire record -- the parts that people liked to dance to the most -- and then repeat those parts or play them over a similar section of that or another record.  The idea of talking, or rapping, over that beat came very shortly after and was influenced by the Jamaican practice of toasting.  Interestingly, one of the things that allowed hip hop to grow was the NYC blackout and subsequent looting of 1977, when a lot of people broke into electronics stores and stole turntables, which allowed a lot more DJs to start practicing and developing new techniques.  New York magazine has a really interesting article about all this if you'd like to read more:

Mrs Figg wrote:I would never call YOU a bitch Eldo. I know my place.

Thank goodness for that.

until they pushed my stroppy button- mrs Figg

Is that the big one on the front?

And you'll have to keep guessing. 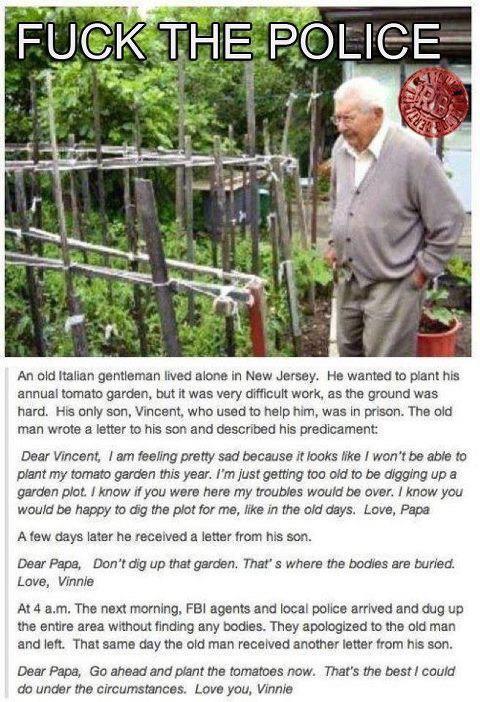 I could kiss Vinnie

great idea ! That'll teach the politzia !
_________________
"All we have to decide is what to do with the time that is given to us. It's the job that's never started as takes longest to finish.”
"There are far, far, better things ahead than any we can leave behind"
If you always do what you have always done, you will always get what you always got

I'm hoping that story is true.

Back to the topic recently at hand (which should be in music, the way the recent weather discussion in recent films thread should be in the meteorology thread, but hey, welcome to forumshire.)

So Eldo...you seem to be making the point that hip-hop has nuance.  Normally I would say rap was all about numbingly repetitive braying and shouting, which is why I can't stand it.  But the videos make a huge difference.  Otherwise after 10 seconds of the Beastie boys I would have put a bullet through the radio, but the humorous imagery made it enjoyable.  The whole setup for Mrs Jackson was downright sweet, which I don't think I've been able to say about any rap since MC Hammer.  It will make me giggle everytime I see it.  The music for Peer Pressure crosses into the listenable by my lights.

So like one of your past posts you've show the diversity and intellectual playfulness that comes up in hip-hop, though I'm afraid for the most part it will continue to annoy me when it comes up in a random context.  It's still gonna usually sound like repetitive braying and shouting. I hope it evolves.
_________________
Halfwise, son of Halfwit. Brother of Nitwit, son of Halfwit. Half brother of Figwit.
Then it gets complicated...

Well not all rap lyrics have nuance, but I think more do then the genre is sometimes given credit for.  I'm glad that you felt different about the songs.  They're just a brief selection of different styles from different decades that I liked and thought would represent the points I was trying to make.  I hope you'll listen to more by those artists, though I totally understand if you're just not interested in hip hop.

I don't know what contexts you end up hearing hip hop so for all I know the stuff you do here is ass, but I'm glad you feel like you can give it a little bit more credit now.

god.. this topic is impossible to norc back on topic..

You should listen to the songs I posted too and then join the discussion Norc!

NB I think "norcing back on topic" is a contradiction in terms.