Oooh, that sounds rather ... ominous.

Amarië wrote:And through what must be some cleverly disguised Stargate technology or teleportation device (so not to scare the inhabitants with spaceships or such), the Forumshire hobbits can go there and remember what Was.

But there are two doughty hobbits, one a craggy faced Scotshobbit and the other a rather handsome Ozhobbit, who are not welcome to visit Dark Planet (even if they wanted to), because they Spoke Up in All Freedom there and dared criticise The Dark Lord and his Corporate Minion! Not only that, they were Banned without warning, just like the Forumshire folk were Sold without warning, which Fact those intrepid Heroes dared mentioned, repeatedly, mostly with a fair lacing of good humour in the face of that Great Dark Act!
_________________
‘The streets of Forumshire must be Dominated!’
Quoted from the Needleholeburg Address of Moderator General, Upholder of Values, Hobbit at the top of Town, Orwell, while glittering like gold.

I thought Pretty Tyrant was the banned one (and I'm still not sure if you were actually banned or left in self-imposed exile). Maybe I'm mis-remembering her stint as Hobbit Lass of the Day, but I'm pretty sure that Pretty is not "craggy faced".

I'll just sit back and wait for her to notice he called her craggy faced- this is probabaly not a good time to annoy her. She went for a 'walk' after the Mayor results came in, off across the fields- so far I've seen three cows, two pigs and several sheep launched skywards- some of them on fire! She has never lost a popualrity contest before.
_________________
Pure Publications, The Tower of Lore and the Former Admin's Office are Reasonably Proud to Present-

Well, if said hobbits* really wanted to return to the Dark Planet and our *dun dun duuuunnnnn* Rules, then I am sure a nice, polite email to council@planet-tolkien.com might be a good start. I think you might find it slightly more enjoyable if you arrived feeling like guests or inhabitants rather than hostages.

I know this is a Shire here and Hobbits love order, but we have almost no formal rules, haven't banned anyone (spambots notwithstanding) in over three years of existence, but manage to cultivate a friendly, creative, and sometimes even though-provoking atmosphere even when we discuss topics that are normally taboo, like religion. I would argue that this was achieved not in spite of but because of our openness and lack of rules. An open space attracts creative people and a great community naturally follows. There are of course other ways to build a site, but that's the philosophy of Free Spirits.

That said, I'm all for closer ties between Planet-Tolkien and Forumshire and I have been for a while, but I'm discouraged whenever Taz deletes threads that mention us either on PT or Bree-land. I'm very grateful to Taz both for making the archive available to us and for hosting it on his own site, but I feel uncomfortable on forums where threads can be deleted simply for mentioning someone or something that has been unilaterally declared taboo. Especially when that declarer is an absentee admin. That's just how I feel in general; not solely about PT. However, I welcome any effort to bring our communities closer, and I have nothing against people from PT. In fact they have been, as a rule, very kind and supportive to us.

I can't log onto dark planet I get redirected to forumshire every time that's banning in anyone's language I seem to remember having this conversation with you once before amarie apologies for lack of proper grammar I'm venting on my mini palantir.
_________________
‘The streets of Forumshire must be Dominated!’
Quoted from the Needleholeburg Address of Moderator General, Upholder of Values, Hobbit at the top of Town, Orwell, while glittering like gold.

We will fight them on the beaches

and in those little huts where you change into your swimmng costume.
The Dark Planet is evil, Taz its evil Overlord- its good copy and thats whats important here!
_________________
Pure Publications, The Tower of Lore and the Former Admin's Office are Reasonably Proud to Present-

I don't care where we fight them.

... yes, the sun shines on in Forumshire, you crazy diamonds!

Sadly though not all Free Spirits have good intentions. (Not meaning the current free spirits here of course, but others out there.) PT grew fairly big and international, and that made things a lot more complicated. We try our best to maintain a safe haven where young and old can meet and share our interest in Tolkien.

As for deleting forumshire ads and such. Planet Tolkien is member of "family friendly sites", which means they have us listed on their site, and we follow their guidelines guidelines, so there are actually quite few sites we can link to. Not everything here at forumshire is equally appropriate for kids. Though we usually explain why we edit and remove things.

Well, that's where I think the two sites diverge in their philosophies regarding children. I think that it's the responsibility of parents to monitor their children's Internet activity if they are concerned and that 'kid-friendly' can be used as a dog whistle term for censoring anything that offends certain sensibilities. I'm not saying that's how it is at PT because I don't know if it is, but it's a risky road to tread down.

I also think kids can handle a lot more than 'kid-friendly' advocates will give them credit for, and that coddling kids and trying to hide them from the real world is counterproductive. You can't stop kids from seeing or finding out about 'mature' topics. I believe it's actually more responsible to let kids get their first exposure to more mature humor and conversation in a safe, controlled environment rather than on their own in secret.

The most important thing, however, is that one of the coolest features of the Internet is that there are a lot of different sites for people to choose from, so it's fine if some sites have policies that I or anyone else disagree with. I appreciate the explanation of why the links the links here were deleted, too, regardless of my other feelings on the matter. So thank you.

Amarie, you specious person you! Pretty and I were banned. Banned, I say! We were never "child unfriendly" there as far as I know, but we were critical at times at what happened. Dark Planet clearly doesn't take criticism well. All our jokes levelled at the average Dark Planet Forumer were never anything more than that, jokes. I understand your points on Dark Planet and accept them without remorse. We never asked Dark Planet to change it's rules. I don't even mind the "banning" so long as it's accepted that we were "banned". You mentioned at some stage you would look into that, but now you seem to have forgotten you said it. Never mind, don't bother, but a "Yep, you were banned," would give closure. Btw I can see the funny side of the "banning" and feel no particular angst at it happening. I thought it both evil and witty the way it was done.

Amarie can speak for herself of course, but I didn't think her post contained any contention that a banning took place. On the contrary, she offered you a way to potentially have said banning repealed if you desired.

I merely read between the lines, Eldo. Amarie offered once before to look into the "banning" and I've heard no more. Has she forgotten about that? Was our conversation back then like the seeds the farmer sowed on rocky ground that the sun shrivelled up one hot Middle Eastern morning? Were Amarie's words sweet nothings? Look, I appreciate Amarie coming and giving her views. I also continue to enjoy her avatar picture - shows a genuine sense of humour, which is most welcome. And, yes, my last post may sound a bit angsty - I guess it is - but I really think of Dark Planet nowadays as a largely "ïmaginary" world, not really Planet Tolkien as such. It's a Big Brother World, a heavilly populated faceless metropolis, as opposed to our Forumshire rural comunity with lots of vulgar red-blushed faces smiling out, but it's Dark Planet, not Planet Tolkien. Dark Planet is only occsionally and only superficially the Real Planet Tolkien with me. Dark Planet, to put it blankly, is an Unrepectable Archetypal Imaginary Evil World. Here to help!

You lost me there, Odo. I'm not really sure what you mean. I am sorry you're evidently upset over what happened with PT, but I see no need to demean another website no matter how strange its way of operating may seem you (or me!).

Yes, I see I'm not particularly clear. I guess I'm feeling a vague sense of animosity which I'm struggling to elucidate.

Let's pretend Tolkien Planet doesn't exist, and that only Dark Planet, our nemesis, exists. So whenever we mention Dark Planet we're talking about Dark Planet, and not about a non-existent place. I'm not sure I'm being any clearer, though.

I think I understand what you mean now, though with you, Odo, I can never be entirely sure.

I object to Odo sounding awfully like me, btw...

That's probably why he sounds so opaque! Be yourself, Odo, not some pseudo-Orwell. You know how I hate people pretending to be someone they're not.

odo banks wrote:We were never "child unfriendly" there as far as I know,

On a personal level i am afraid my daughter feels you can be somewhat child unfriendly, what with the deliberate mis -spelling of her name and all

'A novel is a long piece of prose with ,in the eyes of the author at least, something wrong with it - Neil Gaiman, intro to American gods 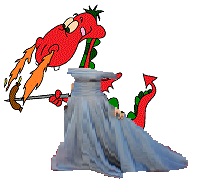 I confess I'm getting confused now, guys. It's what happens when red hot spleen takes over from cool rationality!

Last edited by Orwell on Wed Dec 21, 2011 11:07 pm; edited 3 times in total
_________________
‘The streets of Forumshire must be Dominated!’
Quoted from the Needleholeburg Address of Moderator General, Upholder of Values, Hobbit at the top of Town, Orwell, while glittering like gold.

You're Mayor now, Kafria. I insist you bring up your daughter properly. Imagine the scandal if it got out how illiterate your young'un' is!

Perhaps you might use your pull as Mayor to start up a Forumshire Literacy Program. Here to help!