You should definitely check out the Nolan films if you have an interest in Batman, Lorient.

I still need to watch the Tim Burton films from the '80s and '90s but I grew up around the recent movies so I feel more of a connection to them. I rewatched them with my brother this week in preparation for TDKR and had a blast. I had meant to make a write-up earlier but I'll the opportunity now! Spoilers to follow, naturally, but I'll try to keep them minimal. 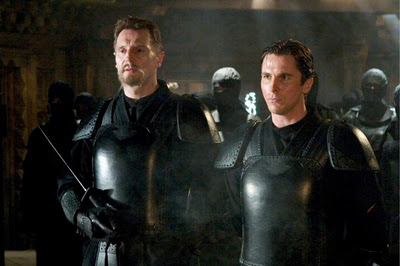 Batman Begins feels a lot more like the comics, based on what I've read of the comics, anyway. It's much stronger in its first half and I love the explanation of the origins of Batman. The movie gets a lot of praise for bringing realism and grittiness to a concept that can be rather silly, but I've always been impressed by the explanation of the Bat theme as "theatricality and deception". The always excellent Liam Neeson is great as Ducard, Bruce Wayne's mentor in the ways of extra-judicial crimefighting.

Once Bruce returns to Gotham and becomes Batman the movie doesn't have quite the same strong focus, but the larger cast is very good. The action scenes are shot in a rather sloppy style though. I suppose they might have been going for a cinema verite feel, but it just gives the impression that Nolan isn't a very good director of action. Fortunately he's very good at other things, though, and Begins succeeds fabulously as an origin story of Batman.

The Dark Knight is the first Batman movie I ever watched, and it remains my favorite. There is very little continuity between this film and Begins, largely because the story of TDK is more or less stand-alone. The visual style is also very different. Instead of the Gothic, comics-influenced look of the first film we have a very modern, normal-looking city. Most of the recognizable landmarks from the first film were destroyed or are otherwise not present. This isn't necessarily a bad thing though, since it allows TDK to stand on its own. It's the complete opposite sort of sequel from something like LOTR where everything is very closely tied together, though.

Obviously the Joker is the most-talked about part of TDK, and rightfully so. When I was younger Heath Ledger's performance scared the crap out of me and it can still be disturbing at times. Unfortunately the rest of the film doesn't always measure up, but it's still very good. The action scenes are a big improvement for the most part and I don't agree with most of the criticisms of Christian Bale that I've read. Even the growling Bat-voice doesn't really bother me. My only real problem with the film is how nonsensical the plot gets towards the end. The Joker's plans are all convoluted and that's part of the point, but it gets increasingly hard to take the plot seriously when it relies on contrivances as much as the third act of TDK does. 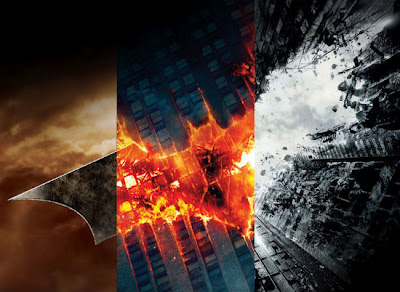 My fairly minor complaints aside, I have to say that TDK is still my favorite Batman movie and also my favorite superhero movie in general. I really loved The Avengers and it's still one of my favorite popcorn blockbusters of recent years, but I think the Nolan Batman movies have aspirations to be something greater. Even though they don't always reach that level, they've still stuck with me for years and likely will continue to do so for many more years to come.

I've had a lot of fun reliving Batman memories and also expanding my horizons a bit. I actually didn't read A Serious House on Serious Earth yet because I was busy for much of today, but I'll find time to do so after I see the movie. I deliberately cleared my schedule for Friday and in less than 10 hours I'll be sitting in the theatre with my brother as the film starts to roll. I'm looking forward to it a lot and will be sure to report back with impressions. I'm curious to hear what everyone else thinks too when you guys get the chance to see it.

Lorient Avandi wrote:Looks really good, but havent seen any of the Batmans in this series. On my to-watch list.

Discussion of the tragic shooting at the Batman premiere has been moved to its own thread.

I did go see the movie today despite the tragic news from Colorado. I'm going to try to write a lengthier review, but it's a bit of a tall order for a film of this scope. It's far from perfect in places but it's hard to hate the film for overreaching when so few blockbuster films reach far at all. I imagine this is how people who liked Prometheus slightly more than I did must have felt.

Has anyone else had the chance to see this film yet?

Some of the reviews annoyed me with comments along the lines of 'well that hasnt answered the questions we were hoping for it to".

Clearly it wasn't supposed to!! How can you review a film based on what you would have wanted it to be? Like going in to a Bond film and writing a review saying "well, it wasn't the Moomins as I was hoping, therefore 1/10."

I thought Prometheus was good. Didn't blow my mind, but was still good.

Re TDKR - hoping to go either Wednesday or Saturday this week. Judgement held until then!

I thought Prometheus was a mess thematically. I didn't have a ton of expectations because I'm not really a fan of the Alien franchise but it was pretty jumbled on its own terms (not surprising with a Lost alumnus in the writing staff

). More importantly I didn't care for the characters much, especially when they all started acting brain-dead. I get that stupid characters driving the plot forward through stupidity is an Alien franchise tradition, but I still don't care much for it. I was also a little disappointed by how limited the events in Prometheus felt.

Spoiler:
They find the Engineer's ship almost immediately and then park the spaceship. The rest of the movie happens in like three set pieces. I have to admit that I was hoping for a bit more of the visual glory of space exploration.

Not trying to tell anyone else what to think of Prometheus, but that was my impression. I liked it a fair deal walking out of the theatre but the more I thought about it the more it annoyed me.

I'm hoping to see TDKR again this week since I've heard from a number of people that it gets better on a second viewing. I think that it's a bit of a mess in some ways but it's also very good. I did have high expectations going into TDKR, though I tried to moderate them, so I'm curious to see how it plays the second time around. )

The thing that gets me about space adventures is just how cramped and small they feel, you know small cabins small space ships amd monsters in dark corners, like Eldo says, I want to see the enormity and grandeur of space, it seems a strange contradiction that a space story is all about running down a lot of dark metal corridors. Not seen Promethius yet, but it looks visually interesting.

I think in the past it was as much about what was practical. Cramped corridors you can do on a budget and a set, space and whole other worlds is a bit more expensive and tricky precomputer effects.
Its probably one of the reasons Star Wars had such an impact - it was the first time you got a sense of the scale of things.
_________________
Pure Publications, The Tower of Lore and the Former Admin's Office are Reasonably Proud to Present-

I think you're right about what was practical in the past, Petty. And I can accept the cramped and claustrophobic style when it's fitting, like in a relatively straightforward horror film like the original Alien. But I think Prometheus was trying to be something bigger. Actually, that leads me to another thing that sort of bugged me. It felt like the film was going back and forth between trying to be sci-fi horror like Alien and trying to be a much grander philosophical film about the origins of human life and our place in the universe. The two don't really fit together well in my opinion.

There were a number of good things about the movie though, especially some of the performances. Michael Fassbender is phenomenal as I've said before.

I'm still waiting to see the film a second time, so in lieu of an actual review, I'll just share this picture I found that sums up my reactions to most of Nolan's films so far. 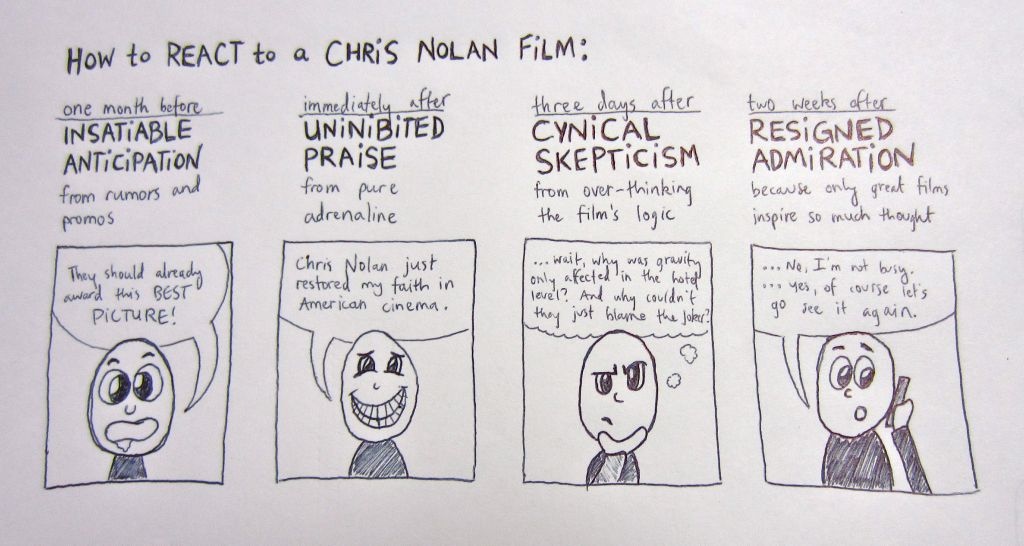 That's true, but it's an issue with most of the superhero genre.

(One of the unexpected joys of meeting European people on the Internet is being introduced to expatriate American comics like Reginald D Hunter and Rich Hall.

I had forgotten how good that video was.

He was in Oslo about a week ago, and I didn't get around to going.