{{ just read an interesting piece on why Germany is showing a lot more interest than usual in the US election, the main quotes I think speak for themselves-}}

"For my generation - born after the second world war - Americans were a great example of freedom and democracy. That's ended with Trump."

Norbert Roettgen, who chairs the German foreign affairs committee, is one of the candidates hoping to replace Mrs Merkel when she stands down next year.
"The four years of the Trump presidency have meant that everything, very fundamentally, has been called into question. The very existence of Nato, the predictability of US foreign policy. It has been a disruption which we haven't seen since World War Two. "We are concerned. I'm totally convinced that the prospect of another four years would not only mean that we're going to see more of the same, but I'm quite certain we would see an acceleration of everything we've experienced. Because then President Trump would not be under the pressure to be re-elected. He would be unshackled."

As Wolfgang Ischinger, former ambassador to Washington and the chair of the Munich security conference argues, as long as there are US troops on European soil, the actual location isn't particularly important but that "regretfully, trust has been lost over this issue".
_________________
Pure Publications, The Tower of Lore and the Former Admin's Office are Reasonably Proud to Present-

{{{ Sadly true. Also what should concern Americans is these sentiments are by and large the same across all of the US's former main allies. And that puts Americans at risk as countries are less wiling to share intelligence in case he tweets it, or just becuase they dont trust his administation.
I reckon if there was another attack on the US on the scale of 9/11 (God forbid) the US would under Trump seriously struggle to put together the sort of coalition of allies and countires  to defend it and fight back that it did under Bush.  And that would be bad for all of us as against some evils the world should and needs to present a united face. But the trust necessary for it Trump has managed to destroy in only 4 years.}}
_________________
Pure Publications, The Tower of Lore and the Former Admin's Office are Reasonably Proud to Present-

To be fair, after the Iraq war and the cluster fuck that is Afghanistan and the various failed interventions since (looking at you Libya!) I think there are very few countries that would be willing to get involved in a large conflict right now anyway.

I could see the UK fancying a go with its new aircraft carriers at some point soon so we are probably in.

Nothing like a good pandemic to cool things down. Are there any ongoing conflicts right now? I've not heard of any but they could just be crowded out of the news.
_________________
Halfwise, son of Halfwit. Brother of Nitwit, son of Halfwit. Half brother of Figwit.
Then it gets complicated...

halfwise wrote:Nothing like a good pandemic to cool things down.  Are there any ongoing conflicts right now?  I've not heard of any but they could just be crowded out of the news.

The United States has several thousand servicemen/women deployed across Africa, including many in active conflict zones (albeit many in advisory roles or under U.N peacekeeping missions etc), seems this isn't reported on very much in your media (or ours-several hundred British personnel are currently deployed in Africa, something I didn't know about until just now):

Sadly there's always going to be some form of ongoing violent conflict somewhere in the world, but we only seem to hear much about in Western media when it directly effects us or results in our servicepersonal suffering casualties, makes me wonder what other operations the Goverment(s) are keeping under wraps.

I'm honestly kind of surprised Trump hasn't started (or execlated) something as a media distraction...
_________________
The Thorin: An Unexpected Rewrite December 2012 (I was on the money apparently)
The Tauriel: Desolation of Canon December 2013 (Accurate again!)
The Sod-it! : Battling my Indifference December 2014 (You know what they say, third time's the charm)

{{ I found this a suprising stat, even given how much of a joke and shit-show Trump has made the US in the eyes of the world it still surprised me- 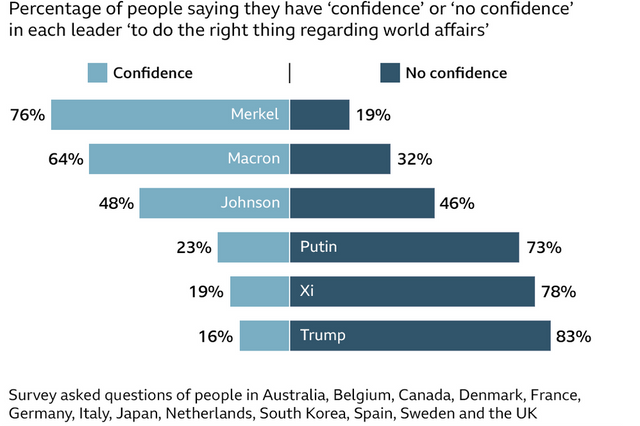 Trump is less trusted than the leaders of two of the worlds biggest authoritarian regimes!

The US used to stand proudly by the rest of the worlds democracies especially Europes with shared ideals of democracy, rule of law, individual freedom. Trump is like a wet dream to China and Russia and their ilk, he's done in 4 years what they've been trying to do in over 50. Another 4 of Trump and the 'West' as an ideal of shared principles will probably be irrepairably damaged.

And to think Trump and his supporters still go on about how he has made Amercia respected in the world. Unbelievable.}}
_________________
Pure Publications, The Tower of Lore and the Former Admin's Office are Reasonably Proud to Present-

Looks like the Conservatives are bricking it and have started to give public support to Biden. With one week to go.

Firstly dont count Trump out. The polls in a lot of places show him trailing by less than he made up against Hillary.

Second, Biden really is the lesser of 2 evils here, the same as Hillary was. He is definitely losing his marbles a bit and is as tied to corporations and self interest as any other politician has been.

I think the US lost its chance at really going another way in the primaries. I could see 4 years of Biden and a flip back to the red team in 2024.

I'm certainly curious to see how the Republicans will react if they loose this election, I suppose it will depend on the % and any red states flipping, will they blame Trump for the loss or double down on his rhetoric and choose someone similar for 2024?

As much as I'm desperately hoping Trump looses (I hate than f*cker), I'm not so sure a landslide victory for Biden would be the ideal result, an especially vindictive and p*ssed off Trump (and his armed fanbase) will have two months as a lameduck president to cause even more damage.

It seems more than most elections there are very few on the fence/undecided voters, will the winning candidate be able to bridge the divide?

{{ My gut instinct is he will win again, I think it will be tight however it goes, but I fear he will win and in another four years of Trumpism America will be a total shit show and international basket case. China, Russia, Saudi, N Korea and their ilk will be in 7th heaven and given acceptance and legitimacy by him at a global level, and places like Palestine are fucked. Democratic alliances like NATO will be fucked, and International Institutions from the WHO to the UN ignored and sidelined. And we can expect the climate to be even more fucked than it already is too as Trump doubles down on fossil fuels and disregarding any envromental regulations, damaging the US for decades, if not centuries to come. Right wing supremicists will continue their rise, as will armed militia on the streets of US cities. And the rights of the LGBT community will be eroded to the point of stigmatisation. Oh and we'll be eating chlorinated chicken and worse in the UK without even knowing it given Trump's trade team said food labelling (ie letting people know what is in the food they are eating and where it came from) is detrimental to trade!
So I really hope he does lose, but my gut says he wont.}}
_________________
Pure Publications, The Tower of Lore and the Former Admin's Office are Reasonably Proud to Present-

there is one pollster who says the other polls are wrong because of "shy" Trump voters who don't want to admit who they plan to vote for. He says he gets a 3-4% shift by asking voters who they think their friends and neighbors will vote for, and believes this actually represents who the respondent plans to vote for. Using this technique Trump gets a hairsbreadth win. (subtract 3% from one side, must add to the other producing a 6% difference)

I think Biden has swung too liberal to appease the far left, and hope he tones it down if elected. This might damp the pendulum swing and perhaps we would end up with moderates from each party for a while. But my hopes are tenuous.

How depressing. But Biden is besides the point, the really important thing is his running mate getting her feet under the desk.
_________________

I would have quite liked Bernie and Tulsi myself.

I think most people who hear Bernie's actually policies agree with them. He is just painted as a socialist because a lot of Americans have an issue with that word given its exaggerated links to Communism rather than what goes in in Europe which those same people consider friends or allies.

I am pretty sure Bernie would have won this election quite easily. Biden is the same kind of character that people were fed up of when they decided to turn to Trump.