http://collider.com/game-of-thrones-prequel-series-hbo-david-benioff-db-weiss/
_________________
The Thorin: An Unexpected Rewrite December 2012 (I was on the money apparently)
The Tauriel: Desolation of Canon December 2013 (Accurate again!)
The Sod-it! : Battling my Indifference December 2014 (You know what they say, third time's the charm)

been musing on GOT after the Emmys and this is probably glaringly obvious but I reckon all the characters who are 'good' all have some kind of disability whether physical or psychological ie Bran, Tyrion, Hodor, even The Hound, Sam and Jaime have been scarred and changed by their physical disabilities or disfigurations, even though being fat isn't exactly a disability it has meant that his life has been blighted by insult and injury. Brienne has been scarred and abused by her size and looks, in GOT the physically imperfect seem to be the 'good guys.'

that's true but I am not sure Danny is exactly a 'good guy' she has killed a lot of people. but maybe that's because she was sold into marriage and Drogoed from behind. She aint exactly a full shilling what with the mass crucifixion n stuff.

Alexander Siddig with another telling piece of evidence of just what a botch job this show is..

Q: Our prince did not meet a pleasant end…

He didn’t. It’s funny, I’m not really sure what happened there. I was contracted to do at least four episodes this season, but then I was in L.A. doing publicity for something else, and I got a call at the Chateau Marmont and there were familiar voices on the other end of the phone. It was one of those guys, and because they didn’t introduce themselves it was like, “Hi, it’s me.” I was like, “Is that David or Daniel?” Anyway, they said, “You know what this phone call is about.” I was like, “Yeah, well, I guess I do.” “So we were going to kill you off at the end of last season, but we decided that we’re going to have to kill you off at the beginning of next season.” I was like, “Okay, life goes on.” But there was something wrong about that because I had been contracted for four episodes in the following season, so if they were going to kill me off at the end of the last season why would they contract me for those four episodes? Because it costs them money whether I do them or not, so it’s not great business sense to do it just in case.

So something happened; I have no idea what. There was an enormous amount of fan excitement when I got named to be on the show, and everyone was like, “Oh my god, yes, Doran Martell. He’s going to be great as Doran Martell.” That might have been the kiss of death. Maybe they didn’t want quite that much attention on that character. Maybe they thought, “Well, let’s prove that we’re going to stray from the books. We’re going to do something else, and he will be our first example of that.” So maybe that could have been the case. Or maybe I just screwed up. Maybe I said the wrong thing to the wrong person.

they may have discovered they couldn't reserve the water gardens any longer.

But their whole handling of Dorne was a botched job, I think they decided they had to get out. It's a shame because Oberon was done so well, if I may say, even better than the books.
_________________
Halfwise, son of Halfwit. Brother of Nitwit, son of Halfwit. Half brother of Figwit.
Then it gets complicated...

Well, it is quite easy to pick out the reason. Because, (1) Dorne wasn't going to be included, it was a last minute thing they decided on, and (2) they obviously meant to get out of that storline as quickly as possible, because they either did not include or killed of any character from that storyline htat could have any impact on the wider story as quickly as possible.

So, as Siddig says himself;

"There was an enormous amount of fan excitement when I got named to be on the show, and everyone was like, “Oh my god, yes, Doran Martell. He’s going to be great as Doran Martell.” That might have been the kiss of death. Maybe they didn’t want quite that much attention on that character."

Dorne was never meant to be a thing, so they had to make sure it didn't catch on. Put simply, they pulled the emergency break. What a masterpiece of storytelling.

And that is far more intellectual effort spent than I want to put into this show.

Bluebottle wrote:Dorne was never meant to be a thing, so they had to make sure it didn't catch on. Put simply, they pulled the emergency break. What a masterpiece of storytelling.

Sounds plausible, though I wonder if they wanted Dorne to be a thing but decided to drop it as much as possible after the response to the Dorne subplot in S5. I imagine D&D's initial expectations were as high as a lot of fans' were, given the overwhelming response to Oberyn in S4.

the whole Dorne thing was boring, the actors are boring the storyline is boring, they did well to get out.

Yeah, my contention is that that was intentional and always their intention. At least from the point they realized Siddig might actually make Doran a popular character with the fans, despite them meaning the Dorne storyline to be of no consequens.
_________________
“We're doomed,” he says, casually. “There's no question about that. But it's OK to be doomed because then you can just enjoy your life."

Anyway, I keep having to remind myself I'm done with this show I'll keep my argumentation at this level from now on.

That was two preposterous statements back to back, Blue.

First saying that Siddig was about to make his character popular doesn't wash because he did nothing more with it than look pained; not that he was given much to work with to begin with. But his character never threatened to become popular.

Then saying they would work to cancel a popular character? Look how they've elevated Varys and Tyrion - even if they wanted to kill off a whole storyline they would have given Siddig something to do before he was eliminated, but they did nothing.

They banked everything on those boring Sand Snakes of theirs, and never gave Siddig a thought. I think the idea was that Oberyn was super sexy so they'd keep running with it. Juvenile incompetence, not manipulation.
_________________
Halfwise, son of Halfwit. Brother of Nitwit, son of Halfwit. Half brother of Figwit.
Then it gets complicated...

Fair to say we disagree completly on this. (I'd put Siddig's performance down to the writing and directing of his character. He certainly sounds like he would have liked to do more with it. And I think the treatment they gave Dorne shows as well as anything can that they primarly wanted a fun destination for Jamie, and the plan was always to drop it after that.)
_________________
“We're doomed,” he says, casually. “There's no question about that. But it's OK to be doomed because then you can just enjoy your life."

Oh, I agree they always planned to get in and out of Dorne as quickly as possible; I was reacting to the idea that what they did had anything to do with Siddig becoming popular. He didn't and they didn't.
_________________
Halfwise, son of Halfwit. Brother of Nitwit, son of Halfwit. Half brother of Figwit.
Then it gets complicated...

Dorne is the only real backfire as far as I can tell, they were banking on the Sand Snakes revving up the sexy once Oberon had gone, but they over-did the sexy and couldn't fight for toffee, so there was Doran gurning and Sand Snakes gurning and it got silly.

Dorne in the book is quite interesting... why didn't they just do that?

That is a good question. I've seen references to the idea that they had so many storylines going already they really didn't want to open up a new one with so many characters nobody had seen before. So they reduced it to Jamie going to Dorne to retrieve Myrcella. He did no such thing in the books, but it kept the character linkage going.
_________________
Halfwise, son of Halfwit. Brother of Nitwit, son of Halfwit. Half brother of Figwit.
Then it gets complicated...

But then the Dornish poisoned her and have been pulled in to the story anyway... with all the characters to boot.

Very short sighted, just like the Iron islands stuff seems to have been.

when you think about it though its amazing they have so many main plots and sub-plots already. they were bound to lose a few by the wayside. it could have got too sprawling and unwieldy. and its TV crews not a mega Hollywood blockbuster. but they have managed to make it feel like cinema. 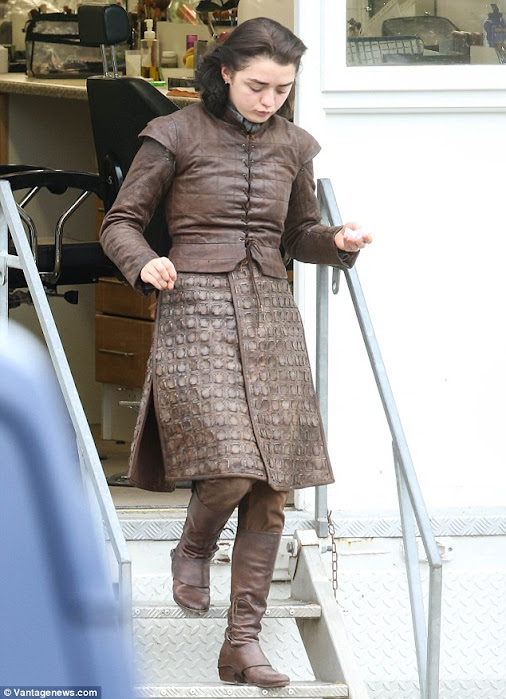 First images of Maisie Williams on the set of Game of Thrones season 7! | Watchers on the Wall

aaaarg I accidently clicked on a huge filming spoiler on Youtube.

I gotta stay away but its too tempting.

"I’ve already discussed the issue of GoT’s setting adapting to the needs of a given scene before. The patriarchy exists so that we can get the gothic horror of a powerless Sansa in Winterfell, or so Cersei can be put upon and backed into a corner with little recourse when her son is being violently abused, yet disappears when Talisa the sass-talking field nurse wanders around a battlefield flirting with a king because that’s a *better* love story. Or it’s *more cinematic* to have Olenna become the official negotiator of House Tyrell since Diana Rigg and Charles Dance sharing the scene is just so dramatically satisfying.

If you’ve read my Season 5 Meereen retrospective, co written with Julia, you’ll also remember how slavery only exists on-screen for Daenerys to win strawmen victories against, yet the second the implications of such a system need to be explored, say…Tyrion interacting with a sex slave, it goes away because it’s more important to demonstrate what a Good Guy™ he is."
https://www.thefandomentals.com/stop-pretending-got-is-worthy/
_________________
“We're doomed,” he says, casually. “There's no question about that. But it's OK to be doomed because then you can just enjoy your life."