Norc wrote:though we must not forget that climate changes have happened throughout the planets history, with the whole planet as a snowball and no snow and etc. etc. the only difference now is that humans are increasing the speed of things and nature can't keep up. i mean, new zealand was covered in ice because i think the whole land was pushed upwards or something, but the animals still survived (they have a mountain parrot and a fat-parrot and so on). it is too fast now so animals (and humans) can't keep up.

i didn't say that. 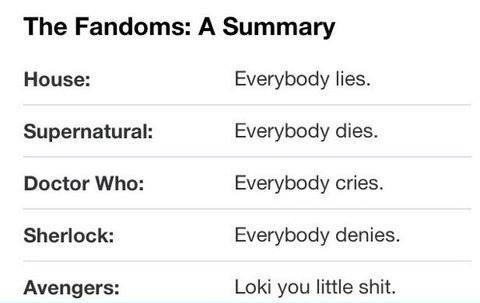 Pettytyrant101 wrote:Yes but if you had a chart showing even longer time scales- would the current up and down be anything exceptional or would you find similar patterns?

going back to this, if you look at the previous relationship between CO2 and Temperature: 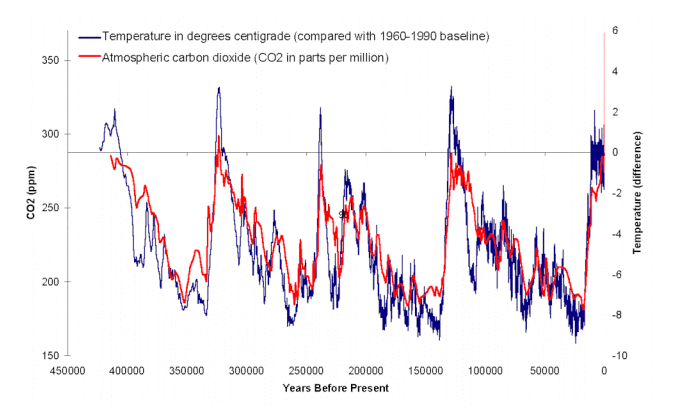 Note the highest level of CO2 over the last half million years or so.

It could be us, that would appear to fit what we are seeing. But appearing to fit and it actually fitting are not the same thing.
And we have stuff like a giant sun not that far away relatively speaking and we dont even understand exactly how that effects things, we dont fully understand weather either, or how the oceans work, and probably rather a lot of other things where we are working from missing data, presumptions or best guesses.
It just seems to me there are too many factors missing from the argument to say with certainty exactly what s causing what we do see.
_________________
Pure Publications, The Tower of Lore and the Former Admin's Office are Reasonably Proud to Present-

Pettytyrant101 wrote:
It just seems to me there are too many factors missing from the argument to say with certainty exactly what s causing what we do see.

That's where statistical analysis comes in. For a statistician there's no need to know all, or even any, of the causal factors to demonstrate a correlation. I haven't looked at the data any deeper than "An Inconvenient Truth", but the people I know who have looked at the data seem convinced that a) climate change is very closely linked to atmospheric CO2 as Halfwise's chart shows, and b) the atmospheric CO2 rise since the start of the industrial revolution is very closely linked to human use. Even the skeptics I used to know have been convinced. The data is apparently that clear.

It's better than a statistical correlation.

• We have catalogued our carbon output, and it matches the recent rise we've seen in CO2.  This is NOT a statistical correlation, it's a single variable.
• If other things remain the same (admittedly a big if) we can calculate with high precision how much of a temperature change will be caused by a change in CO2 via simple energy balance, then calculate how much water vapor will increase (assuming relative humidity stays the same, another big "if"), and finally match it to what we've been seeing. This is assumed causation, not correlation.

There is a lot of variability in the temperature record, but as David points out, the match is pretty good.

Petty's skepticism is warranted in that we cannot do controlled experiments with the climate system.  Right now climate modellers have lots of adjustable parameters to tweak (see above).  They tend to tweak to match the last 30 years when we have the best data record, then extrapolate.  But they could have a number of incorrect tweaks that cancel out in the present, with unknown results for the future.

Right now all they are comparing to is each other's models.  Not exactly a fair test.  They get largely the same answers, but big surprise, they are using the same set of community assumptions.

So we are working on very well educated guesses, but two things are for certain and completely undeniable: we have increased the CO2 in the atmosphere by about 25% in the last 50 years, and there must be effects in the energy balance.

Exactly what those effects will be (we are still not at equilibrium) remains in question.  But under reasonable assumptions the calculations are clear that they will not be minor.  Not cataclysmic, mind you, but not minor.
_________________
Halfwise, son of Halfwit. Brother of Nitwit, son of Halfwit. Half brother of Figwit.
Then it gets complicated...

So what we can say with certainty is that there have been recent changes, human activity is a factor in it- but how all the possible factors might combine and the actual results that might emerge from those are unknown?
_________________
Pure Publications, The Tower of Lore and the Former Admin's Office are Reasonably Proud to Present-

not unknown, one can not agree that's it..we can speculate, there are about 15 different outcomes..

Pretty much yes, Norc's response to Petty is on target.  We can propose reasonable scenarios and make calculations based on them.  Once we know the physical scenario the radiation/thermal calculations are very good, but how we arrive at particular scenarios remains a mixture of hard physics and educated guesswork at the behavior of complex systems.

The biggest uncertainty remains clouds and storms.  We have numerical models that seem to do pretty much the right thing, but it's hard to get enough data to initialize them exactly as a real world example to compare to.  From what we can tell they are still not perfect, maybe 80-90% correct.  But these models are too computationally expensive to run in a climate model covering the entire earth for a period of decades.

The surprising rate of melt of the arctic ice shows that the modelled dynamics of water ice interaction isn't right: seems to be more going on beneath the ice than the current mathematics captures.  Very much like the storm and cloud case: we can model given cases on a small scale to a reasonable extent, but can't fit it all into a climate model.

Heat transport into the earth's surface and oceans have mixed accuracy depending on how much we know about the soil and rocks down below, the temperature structure of the ocean, etc.

Once we know the characteristics of the storms and ice, etc, we can state pretty well what the impacts will be.  But current climate models can't pass a large travelling storm from grid cell to grid cell, much less model the storm to begin with.  So while we may know what the impacts of storms and ice are NOW, we can't reasonably project into the future without throwing in some physically guided guesswork.  So different scenarios are proposed and calculated.  They all show things happening: all we know is that things will happen.  And a suite of educated guesses and consequences is a pretty handy thing to have.

There's a continuous spectrum of possibilities depending on the educated guesses you make (how much CO2 being emitted during this time being the main variable), but the number of educated guesses made so far with calculations and publications of what will happen for the next few decades would be between 10 and 20.  They all show warming, but to different extents, and different amounts of snow and precipitation etc. This just refers to the current state of modelling, there have been many more done with more primitive models as the field has evolved.

The number of non-reasonable guesses just done for curiosity is much higher.

Among the set of serious projections most groups will do a set of 3 or 4 emission scenarios, and each group will have somewhat different assumptions about how other parts of the system will react and interact.
_________________
Halfwise, son of Halfwit. Brother of Nitwit, son of Halfwit. Half brother of Figwit.
Then it gets complicated...

i am just gonna sit back and look at you guys being all "agree Norc" after i contributed with one smart sentences. where is my pipe.

Huh? I modulated Norc's "15 different outcomes" to "15 reasonable outcomes proposed and published so far at the current state of climate models". It's just what's been done so far, not all possibilities. What's to disagree with?
_________________
Halfwise, son of Halfwit. Brother of Nitwit, son of Halfwit. Half brother of Figwit.
Then it gets complicated...

i am just pointing i used one sentence to say something smart, you guys used several columns and i basically said exactly the same as u guys have been saying all along.

Figgy, dang it...you deleted the picture! Now I have to go back to digging through my old stack of Cosmo.

I'll do you a deal, if Petty posts a photo posing in full Scotshobbit regalia in his buckie barrel I will repost it.

Im not taking pictures of my regalia.