Sorry this is two days late! But you know what journalists are like- I had to get them back out the pub, like getting winkles out of shells, without a pin. And it took two days because on day one I lost the argument and they persuaded me to stay in the pub instead. But I finally got them out with only a large stick, two angry pigs and the threat of a date with Pretty. 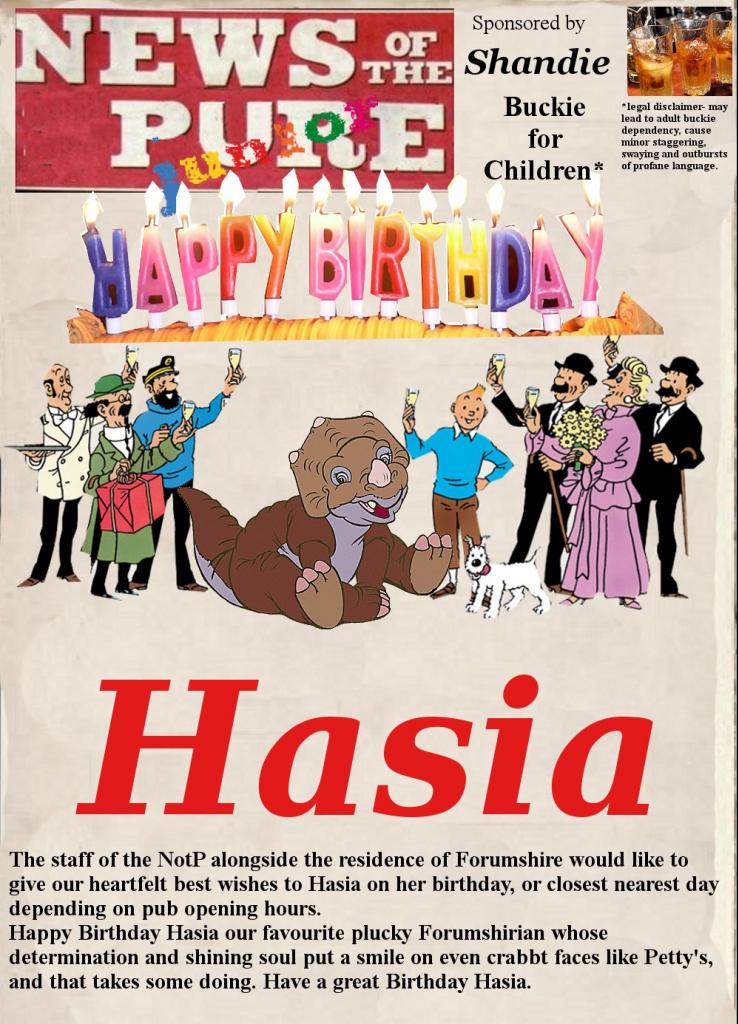 Sorry this is two days late! But you know what journalists are like - Petty


yes, the exact opposite of late.

Not NotP journalists, or in fact any journalists, where a pub is concerned. Its harder to get a journalist back out a pub than, well, me.
_________________
Pure Publications, The Tower of Lore and the Former Admin's Office are Reasonably Proud to Present-

Best of wishes from central Fjordlandia as well

i think i did wish u one on the 19th though, but since the Notp is terribly late

anyways, we all know birthdays last a couple of days after "the day" so keep celebrating a week from now

at first we thought you forgot. But how beautiful and special and she will treasure this forever. She cried and cried, because she thinks she is not special. Her mother was only able to stay two days and she cannot understand why she is different , with no mother in this city. She does not know how ill her mother is. It is hard and sad. So you all made her feel so wonderfull.
She said this is a really nice forum and when she is eleven, she wants to come on. And she will take you for who and what you are. She does not care. She thinks your hearts are so wonderful, she thinks of you as relatives that she cannot visit except on this site. But it is wonderful to her.

A (very) belated happy birthday to you, Hasia! I was out of town when this thread was posted so I only saw it on my phone, but congratulations on your birthday! I hope the next year brings you all the best.

Am I grateful Hasia had this gorgeous paper to look at. What a week. First she starts having trouble breathing and then she looked like her whole body is scalded. I gave her a thousand grams of c an bathed her in rubbing alcohol. Then we got her to the hospital and waited. It turned out she was having a life threatening allergy to the penicillin she was prescribed for her swollen glands. That was so scarey,. So of course they pulled her off it.
Then yesterday it was the first day of her cowboy day camp, /she dressed up in her cowboy finery, down to the cool scarf and had a perfect day. She brought a racing schedule for a memory and was happy. Then her daddy got home from being the chef on Sundays that does the buffet, sometimes he does over five hundred soufflés and crepes and eggs benedict alone at the table, never mind all the rest . And no sitting down. So he always gets about an hour sleep before mass. Travis has custodial that day from about two in the morning until seven that night, I was so tired from work the previous night , so we all lie down for a little. The door bell rang and it was the neighbor asking for Clayton. I said he was in the washroom and then he would sleep a little. She said he put together her last barbeque and now had a much bigger one and wanted him to put it up. She kept insisting he wanted to do such things. Anyway Clayton just sighed and went to do it. Hasia asked might she go as well. So off they went Then a while later she came home crying and he said she was stung by a wasp. Back to the hospital because she was not even finished swelling and such from the penicillin. Then I find out the lady knew perfectly well wasps had made a nest in her old barbeque and her own cousin has been stung on the mouth. She just chose not to say. I was so angry as she was the reason we lost our former car and had to have a small fortune to get another. Others too, but we all forgave her as she had things tough then.
So Hasia could look at all the sweet pictures and comments and feel so happy. Thank you.

Oh Hasia- you do go through the wars- but you are indomitable (and without ever being crabbit about it all, which is a puzzler

) I am so glad you enjoyed your birthday though and I hope the coming year brings you joy upon joy. Its got to be your turn by now.