Whats Merlin doing back there? Thats worse than TH poster!

What's he doing back there? Petty, if you spent 5 seconds in Merlin fandom you wouldn't ask such a stupid question.

there are some very gay gif-sets out there just saying... 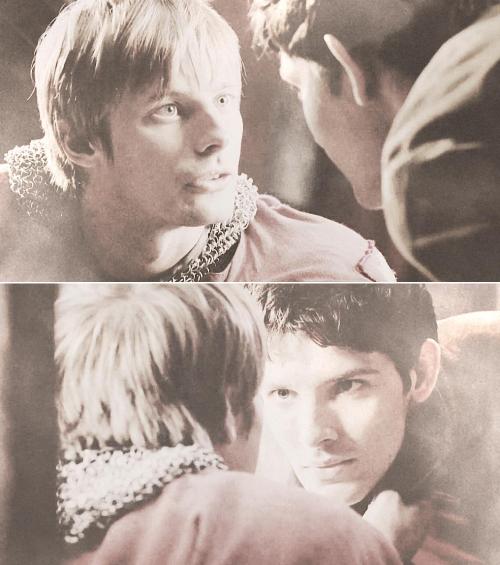 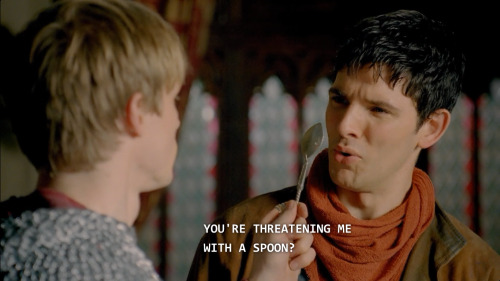 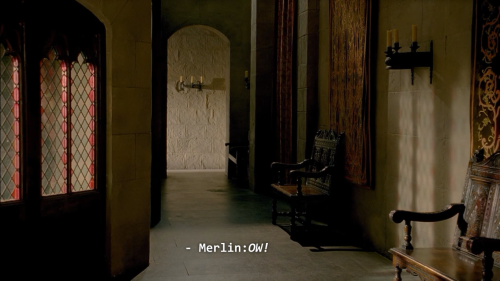 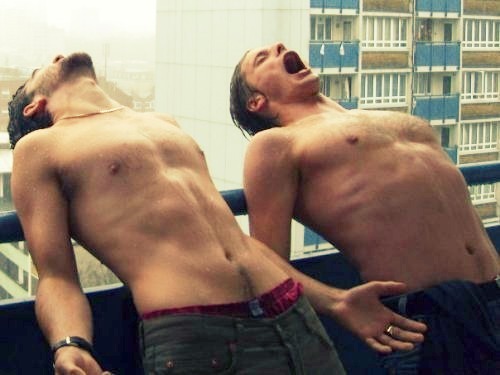 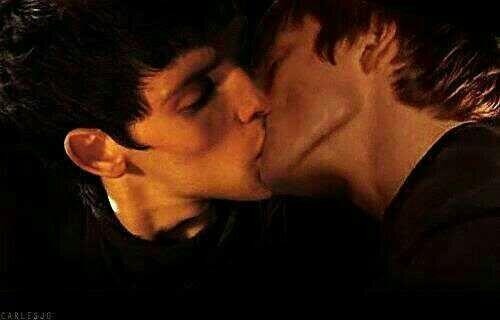 and i am not even in the fandom.. 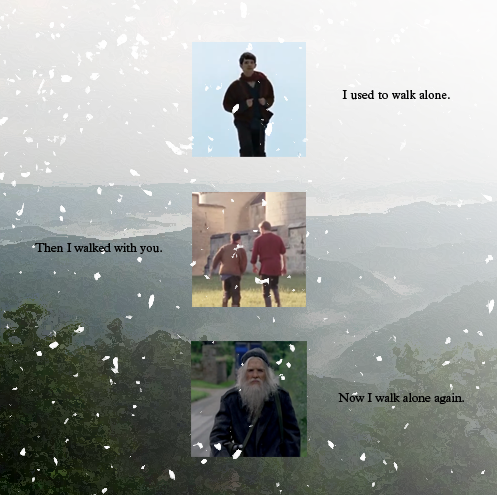 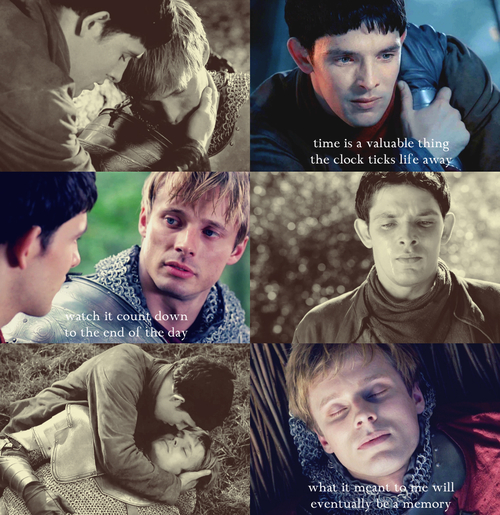 Norc wrote:and i am not even in the fandom..

I wa a vegetarian for a long time and then a specialist said I had to have heme iron because my red cells were only half as big as they were supposed to be and there were only half the normal amount. But I try to eat as little fowl as possible and some fish. David you sound aboriginal, little Hasia is Jewish as am I but she has some Okanagan Aboriginal in her and so we are very mindful to thank our Creator and thank the animal that nourished us. I Was very aware because I stayed with my cousins at various ranches and farms in Canada and the U.S. during the holiday. The children always had a calf in 4h that they each took care of until the auction in early summer. They got to blow all the money and they knew the calf they had cherished would often be eaten a little later. I found this hard and would usually try to hide their calves. I got in terrible trouble and dear shy uncle Miles had a bull whip for the disobedient so I took my life in my hands so to speak. One time like usual , father bought about five hundred chickens for his restaurant. They would put their foot on the neck and pull it off and it would still stagger around for a bit. I screamed and cried and I had to join the ladies in gutting them and pulling out the feathers. This one year I could not bear it so I hid as many as I could up the trees. When father found out.......
And having named all the chickens I would invariably say with a sniffile " Is that Peggy you are eating whereby my uncle would look daggers at me and my cousins, gentle though they were would tuck in.
I had to go with father one time duck hunting. It was appalling to me. It was dark and wet and the air was heavy with fog when we all set out in the canoes, I was told to shut up and if I said a word I would be sorry. They made silly noises with these weird noise makers and sure enough I could hear them coming up to where we were. With pounding heart I heard all the guns being cocked and then.....I stood up shakily and yelled :go ducks go, where by shooting and yelling began and a few scarey looking burly men fell overboard. Father was so angry.
The last time I had to go with the hunters with red eyes, and one of the last times I saw father alive we were going deer hunting. Bambie looking bucks every where. This time a lot of men told me I think to shut up or they would pretend I was a buck and well.....accidents happen. I saw a huge buck behind us walking very stealthily as if it somehow knew and I said nothing, willing it to turn back and run.
None of that party got anything and you can't imagine when I told father about it what they had to say about me.

Oh leelee! What a time youve had of it!
Although if you believe in a God he must have meant us to eat chickens or He wouldnt have made them so their heads pop of so easily!

it was too much text to actually read through for me, sorry, but 4H

It sounds like my family was gentler than yours when I was little, Leelee. I was told that it was OK to be sad, and that I didn't have to watch or help with the skinning and butchering until I felt ready. They explained to me that we made a deal with the animals: we'd give them the best life we could for a short time, a life they wouldn't otherwise have had, and when the time came they'd give us food.

That is lovely David.  How wonderful.   It was business to them. I guess then I won't tell you how they put their old dogs to sleep. I was around seven when I learned, I was sick for about that many years after; and all the love and devotion they gave them before that. shiver.
But then the lady who was married to father made them stitch my foot with no freezing. I was not allowed to cry, and the doctor who was horrified but could do nothing as he would have had to go to court over night only gave me four stitches because he could not stand it.But I lived.  That is why I nursed my children so long in addition to the fact they had an immune problem. but I could have used the milk bank.I wanted them to remember being nursed and rocked and sang to, It , they said , can get you through many things.

That's sad Leelee. It must be hard on people to be that cold.

Pettytyrant101 wrote:I think Lance a lot of that comes down to how you are raised.
My neighbours kids help in the planting of the veggie patch, they gather in the berries in summer and help make jam, the clean out the chickens coup and gather the eggs, and if an animal dies they are there to see the that and the result.
They are very aware not only of where food comes from, what it was before it got to the shop shelves, but also surprisingly aware of the differences in quality between home grown and mass produced.

If however you were raised on an estate in the city and have never so much as seen a live chicken or cow  your life then its hardly surprising kids dont have any real understanding.

Thats not quite what I meant. Our kids (I use our... they are my partners but I will use the term 'our') are very aware of where things come from. We have had pets that have lived and died... Cena the goldfish died about a week ago!

What I meant is the concept of a life ending and what that means for the life. At some point you realise that with yourself and then apply it to others.  At a young age I think it is one of those things that you cannot comprehend and so is meaningless... like £1000. What child of 8 years old REALLY knows what £1000 is? They dont know the work gone in to earn it, what it looks like or how little you actually get for it.... especially when you have a mortgage and bills and food etc.

Im not sure when it is that death becomes more comprehensible, at least in terms of its finality in this existence. That the thing that dies has its of thoughts and feelings and memories and wants etc.

Does that make more sense?

Ah so in a sense what your really asking about is empathy. When do we realise not just that things die- but the things are living breathing creatures, with lives, thoughts, dreams of their own?
_________________
Pure Publications, The Tower of Lore and the Former Admin's Office are Reasonably Proud to Present-

Yeah, I suppose so. The thing that means a child (most, not all) will happily pull off a spiders legs without thought about the spider itself where later in life they (again most, not all) wouldn't because they would think about hurting it.

Pettytyrant101 wrote:When do we realise not just that things die- but the things are living breathing creatures, with lives, thoughts, dreams of their own?

Are you including Scotshobbits in that?

Bloody cheek of course! We breath, between puffs on our roll ups, wheezily, we have lives finding stuff to be crabbit about, thoughts of stuff that makes us crabbit and dreams of buckie!
_________________
Pure Publications, The Tower of Lore and the Former Admin's Office are Reasonably Proud to Present- 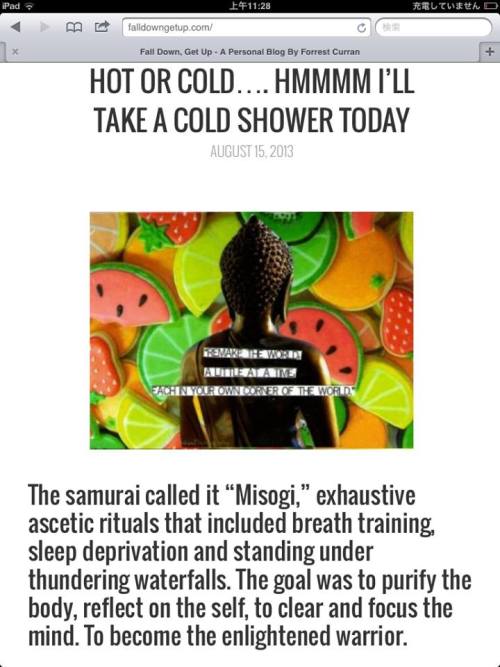 And to freeze yer bollocks off.

i want all of this.

Genius I particularly like the tea and biccies one

I like the stair storage one, the light was pretty neat