Would be fun to watch, wouldn't it?

There's no doubt it would be entertaining, but I think the view might be better if we went down and joined Chris and Orwell to enjoy the spectacle. Like fireworks, there's a lot to be said for admiring them from a safe distance.

I can imagine the NY Times headline (in fact I'm sure they've already picked it out themselves):

At first I thought they hadn't shopped someone's face on top of Grandpa Munster's. 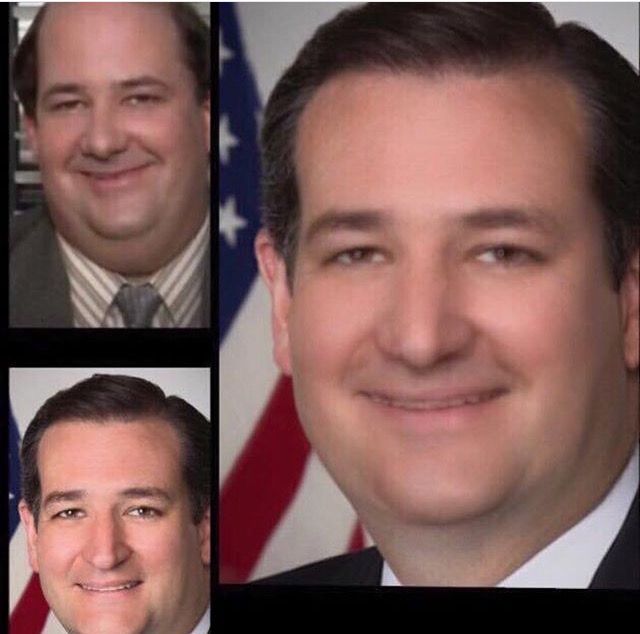 Cruz recently joined Kasich in the "mathematically eliminated" column, which I'd imagine has something to do with the timing of their joint announcement that they want their supporters to vote strategically for one or the other with the goal of keeping Trump under 50% of the delegates. Seems it might have been better to adopt this strategy back when Marco Rubio came out in favor of it, but there's a good chance Trump would have finished with only a plurality anyway, so we'll see. Curious if it'll backfire at all.

Eh, I'm burned out on politics. I can't care anymore. Not like Trump would be able to get any of his policies enacted anyway. Things are just going to get worse no matter who is in charge.

The sort of resigned to it all feeling is why many people are backing Hillary: yeah she's a total fake, but is more likely to get some incremental changes inacted. With either Bernie or Trump the stonewalling by congress would be worse than we've even seen with Obama.
_________________
Halfwise, son of Halfwit. Brother of Nitwit, son of Halfwit. Half brother of Figwit.
Then it gets complicated...

its about time you guys had a female president.

Yeah, since you initially liked both 'change everything' candidates, voting for a business-as-usual candidate would be a pretty pointless exercise.

For a truly evil question, if it came down to Hillary or Cruz, who would you vote for?

This is actually what I think will happen. The GOP is putting up a front saying they don't like Cruz, but the man is not the outsider he paints himself as. Political commentators like Hannity and Limbaugh are painting Cruz as an acceptable choice so that when he does become the nominee they can say to their listeners, "Okay, so it worked out for us in the end anyway with our 'outsider' candidate." But Cruz has worked for the Bush's, been solicitor general for Rick Perry, and is a sitting senator, plus his wife works for Goldman Sachs!

Boy, I wish I could also be a Washington outsider!

In reality I'd vote to stay home. But if I had to vote I'd probably choose Clinton because of Cruz's religious rhetoric. That was a big reason why I liked Trump, because he wasn't constantly humping the bible.

Remember how well "Anybody but Bush" worked out?

I still like the man, just bummed they're going to deny him the nom.

I was surprised to see today that Maryland went back to paper ballots this year. I remember them being used when I used to go to polling places with my parents in the early-mid 2000s, but this is the first election I've been eligible for that used them. Glad to see the voting machines go. It might not be the most environmentally-friendly option, but I think it's important to have a paper trail in elections.

I was six at the time so I don't remember anything from the 2000 election.

No hole-punching on these ballots, fortunately.