Just because it makes me happy: 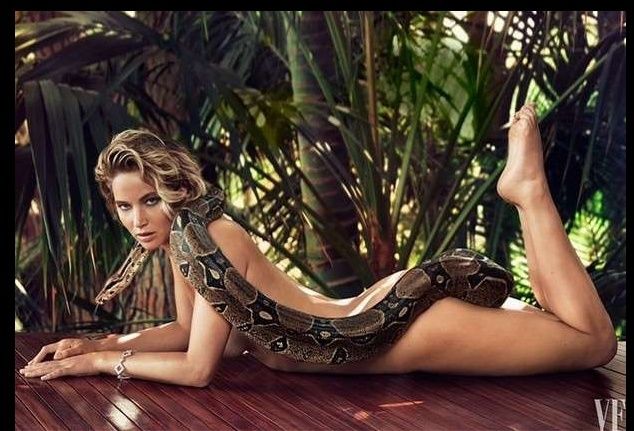 Okay, I think I found somebody better than JLaw.

She is quite charismatic!
_________________
When I was younger
I would not have believed them
though a hundred had said it
and a thousand tongues had told
that I would sink to these ways
that I would fall on these days--
the days I have fallen on
the ways I have sunk into.

So I managed to score a ticket the the Late Show with Steven Colbert, and who should be the guest but Jennifer Lawrence!  I was only 15-20 meters away, but the main thing I could see was her feet on account of a big TV monitor and security guard between me and her.  But as you'll see her bare feet were something of a big deal.

She said she was kinda tense, so Colbert fished out some dark rum for her.  After the first drink she kicked off her shoes and got comfortable.  They had three drinks.
She walked back to her dressing room barefoot.

The next guest was the comedian Oswald Patton, and seeing what happened with Jenn he declared himself stressed and in need of a drink.  They had two drinks.  Note Steven was the common factor in both drinking sessions.

When the guest band came on Steven said he'd introduce them then go lay down because "I'm really fucked up."  Thanks Jenn.

The band was pretty lame-ass (MGMT or something), and the vocalist admitted he was nervous and screwed up the lyrics so they had to film it again.  They were blowing so much fake smoke that the fire alarms were tripped.  The stage manager told Steve about it when he reappeared (I suppose the alarms woke him up) and he said "Keep going, I don't give a shit" and went back to lay down.  Then the fire department showed up and we all waved to them.  Then the lame band played another number (twice:

If they were any good I wouldn't have minded).

So all in all it was a good time.  JLaw was her usual awesome - here's what made it on air:

How fun! I like hearing these behind-the-scenes details. The bit about the fire-fighters almost sounds scripted. As though the production crew couldn't avoid that sort of thing, sheesh.

I'm not a fan of the music that MGMT has put out since their debut, but I think that Oracular Spectacular is a wonderful album!

ooooh! that seems so much fun! i'm jelous!!! and i agree, the behind the scenes stuff is always the fun part

she does drink alot, poor Colbert xD or well.. he kinda led the way though... it's kinda sad though that the talkshow-industry somehow have figured out she's more fun when she drinks (which is probably true) so people keep handing her drinks.. also, really cool she has "read herself good" and being a spokesperson

4.40 minutes in she talks about the rest of the colbert day. it's really funny

I thought the mention of jumping into shark infested waters was just an offhand joke at first, but it wasn't.  I can actually get the same way while drinking in the proper company.  But if I don't know anyone I just get quiet.
_________________
Halfwise, son of Halfwit. Brother of Nitwit, son of Halfwit. Half brother of Figwit.
Then it gets complicated...