I dont doubt it Chris ! I bet they are ALL doing just that,


and then there is Obama..

It's funny because Obama actually won by a larger margin than either of George W. Bush's victories, despite Republicans claiming right up until election day that the polls were actually in Romney's favor but those damn liberal pollsters were trying to distort the results.

Can anybody say "SWACK!"?


It’s now 2015, nearly two years after Obama took the oath of office for the second time. A few years ago, prognosticators were very confident about what would happen to America by now because of Obama’s reelection. Let’s check in and see how their predictions turned out:

In March 2012, on the floor of the United States Senate, Mike Lee (R-UT) predicted that if Obama was reelected gas would cost $5.45 per gallon by the start 2015. Lee said that gas prices would rise 5 cents for every month Obama was in office, ultimately reaching $6.60 per gallon.

Lee was not alone. Newt Gingrich, running for the GOP nomination, predicted that if Obama was reelected he would push gas to “$10 a gallon.” Gingrich said he would reduce gas prices dramatically by reversing Obama’s energy policies. Gingrich flanked himself with campaign signs promising $2.50 gas if he was elected.

Today, the nationwide average for a gallon of gas is $2.24.
A lot of the reasons for the decline in gas prices are well beyond Obama’s control — including weak international demand and OPEC’s failure to reduce supply. But the policies that Lee, Gingrich and others criticized — the failure to approve the Keystone XL pipeline, more EPA regulation and limiting drilling on public land — have not gotten in the way of historically low prices.

2. Unemployment was supposed to be stuck at over 8%

3. The stock market was supposed to crash

Immediately after Obama won reelection in November 2012, many commenters predicted that the stock market was toast.

Charles Bilderman, the author of the “Intelligent Investing” column at Forbes, wrote that the “market selloff after Obama’s re-election [was] no accident,” predicting “stocks are dropping with no bottom in sight.” Bilderman said that the policies the Obama administration would pursue in his second term would “crash stocks.”

On Bloomberg TV, investor Marc Faber predicted that, because of Obama’s reelection, the stock market would drop at least 20%. According to Faber, “Republicans understand the problem of excessive debt better than Mr. Obama who basically doesn’t care about piling up debt.” Faber joked that investors seeking to protect their assets should “buy themselves a machine gun.”
The Dow Jones Industrial Average currently stands at 17,823 and is up over 35% since Obama was reelected.

4. The entire U.S. economy was supposed to collapse

Rush Limbaugh predicted that “the country’s economy is going to collapse if Obama is re-elected.” Limbaugh was confident in his prediction: “There’s no if about this. And it’s gonna be ugly. It’s gonna be gut wrenching, but it will happen.”
The economic freefall would begin, according to Limbaugh, because “California is going to declare bankruptcy” and Obama would force states like Texas to “bail them out.” California currently has a $4 billion budget surplus.
Limbaugh added, “I know mathematics, and I know economics. I know history. I know socialism, statism, Marxism, I know where it goes. I know what happens at the end of it.”

He did fudge, however, on the exact timing of the economic apocolypse. Limbaugh said it could take “a year and a half, two years, three years.” It’s been two years and two months since Limbaugh’s prediction, so he still technically has another 10 months to be proven right.

The U.S. economy grew at a robust 5% in the 3rd quarter of 2014, following 4.6% growth in the second quarter.
Although these dire economic predictions have proven false, it doesn’t mean there aren’t real, persistent problems with the U.S. economy. Most critically, wage growth for American workers remains stagnant. That’s why, although many economic indicators are strong, a lot of Americans aren’t yet feeling the impact.

America really does do everything bigger. Not necessarily better, but bigger.
I mean we have the same sort of thing going on in UK politics, it part of the game. But it all seems to much more exaggerated, so much more hyped, so much heightened and more disconnected for reality outside of political point a scoring than it is even here.
American news channels put the same sort of energy into picking, promoting and defending a particular political side as British people do into supporting their football team.
_________________
Pure Publications, The Tower of Lore and the Former Admin's Office are Reasonably Proud to Present-

Only Fox is so evident about the side it picks.

I wish US congress descended into shouting matches more often, like everyday. It's not like they're respectable people or anything. Crooks, the lot of them.

Well we've had at least one high-profile physical altercation on the Senate floor, but it didn't work out too well in the long run... 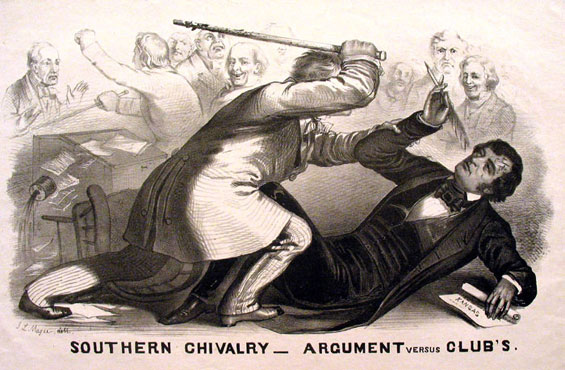 Sarah Palin just redeemed herself in my eyes.