What the hell....it wasn't working, so I kept trying...but it was keeping track and put them all up.

And here I was thinking you were singin' a tune. King of the bongooo, bingo bungoooo.

I grew up before smart phones or social media existed and if you took a dodgy photo on a photographic camera, on film, you kept full control of who saw the print and the negatives, and having to physically go to a shop to get it printed and possibly have some stranger develop said print, and have a good laugh/call the police/tell your parents, stopped 99.9 of photos becoming public. these days its all instant and who the hell knows who is looking at your private bits without consent. its too easy to just take selfies that seem like fun at the time but sober seem stupid and weirds you out. I think if people had the time to think about what they were really doing, from taking the photo/to tootling down to the camera shop to get it printed, most photos would never get developed.

this does not include photocopying your bum at office parties. this will always happen.

I think it's a fine thing for youth to celebrate and document their youth, but they do have to be careful. The world is a little too open these days, so you never know what will get out. I think opting out of data sharing should be the default, but unfortunately in may cases the opposite is true.
_________________
Halfwise, son of Halfwit. Brother of Nitwit, son of Halfwit. Half brother of Figwit.
Then it gets complicated...

The permanence of things on the Internet does require a different way of thinking about certain things than previous generations have had to do, but I find most of the hand-wringing in the media about sexting and the like to be pretty much clueless and overblown.

well as i mentioned earlier... as long as it you keep it to yourself.

I used to get weird looks when I would have to tell people that I don't have a facebook. I don't get weird looks anymore, which is nice and makes it feel like it's becoming common for people to not be on "social" media. Whenever I feel like it would be nice to have one I just ask myself, "Do you really want Mark Zuckerburg to have all your information?" He is a man I do not trust.

Zuck: Yeah so if you ever need info about anyone at Harvard
Zuck: Just ask
Zuck: I have over 4,000 emails, pictures, addresses, SNS
[Redacted Friend's Name]: What? How'd you manage that one?
Zuck: People just submitted it.
Zuck: I don't know why.
Zuck: They "trust me"
Zuck: Dumb fucks

Five hours, (and who can do it less in?)
By haughty Celia spent in dressing;
The goddess from her chamber issues,
Arrayed in lace, brocades and tissues.
Strephon, who found the room was void,
And Betty otherwise employed,
Stole in, and took a strict survey,
Of all the litter as it lay;
Whereof, to make the matter clear,
An inventory follows here.
And first a dirty smock appeared,
Beneath the armpits well besmeared.
Strephon, the rogue, displayed it wide,
And turned it round on every side.
On such a point few words are best,
And Strephon bids us guess the rest,
But swears how damnably the men lie,
In calling Celia sweet and cleanly.
Now listen while he next produces
The various combs for various uses,
Filled up with dirt so closely fixt,
No brush could force a way betwixt.
A paste of composition rare,
Sweat, dandruff, powder, lead and hair;
A forehead cloth with oil upon’t
To smooth the wrinkles on her front;
Here alum flower to stop the steams,
Exhaled from sour unsavory streams,
There night-gloves made of Tripsy’s hide,
Bequeathed by Tripsy when she died,
With puppy water, beauty’s help
Distilled from Tripsy’s darling whelp;
Here gallypots and vials placed,
Some filled with washes, some with paste,
Some with pomatum, paints and slops,
And ointments good for scabby chops.
Hard by a filthy basin stands,
Fouled with the scouring of her hands;
The basin takes whatever comes
The scrapings of her teeth and gums,
A nasty compound of all hues,
For here she spits, and here she spews.
But oh! it turned poor Strephon’s bowels,
When he beheld and smelled the towels,
Begummed, bemattered, and beslimed
With dirt, and sweat, and earwax grimed.
No object Strephon’s eye escapes,
Here petticoats in frowzy heaps;
Nor be the handkerchiefs forgot
All varnished o’er with snuff and snot.
The stockings why should I expose,
Stained with the marks of stinking toes;
Or greasy coifs and pinners reeking,
Which Celia slept at least a week in?
A pair of tweezers next he found
To pluck her brows in arches round,
Or hairs that sink the forehead low,
Or on her chin like bristles grow.
The virtues we must not let pass,
Of Celia’s magnifying glass.
When frightened Strephon cast his eye on’t
It showed visage of a giant.
A glass that can to sight disclose,
The smallest worm in Celia’s nose,
And faithfully direct her nail
To squeeze it out from head to tail;
For catch it nicely by the head,
It must come out alive or dead.
Why Strephon will you tell the rest?
And must you needs describe the chest?
That careless wench! no creature warn her
To move it out from yonder corner;
But leave it standing full in sight
For you to exercise your spite.
In vain the workman showed his wit
With rings and hinges counterfeit
To make it seem in this disguise
A cabinet to vulgar eyes;
For Strephon ventured to look in,
Resolved to go through thick and thin;
He lifts the lid, there needs no more,
He smelled it all the time before.
As from within Pandora’s box,
When Epimetheus op’d the locks,
A sudden universal crew
Of human evils upwards flew;
He still was comforted to find
That Hope at last remained behind;
So Strephon lifting up the lid,
To view what in the chest was hid.
The vapors flew from out the vent,
But Strephon cautious never meant
The bottom of the pan to grope,
And foul his hands in search of Hope.
O never may such vile machine
Be once in Celia’s chamber seen!
O may she better learn to keep
Those “secrets of the hoary deep!”
As mutton cutlets, prime of meat,
Which though with art you salt and beat
As laws of cookery require,
And toast them at the clearest fire;
If from adown the hopeful chops
The fat upon a cinder drops,
To stinking smoke it turns the flame
Pois’ning the flesh from whence it came,
And up exhales a greasy stench,
For which you curse the careless wench;
So things, which must not be expressed,
When plumped into the reeking chest,
Send up an excremental smell
To taint the parts from whence they fell.
The petticoats and gown perfume,
Which waft a stink round every room.
Thus finishing his grand survey,
Disgusted Strephon stole away
Repeating in his amorous fits,
Oh! Celia, Celia, Celia shits!
But Vengeance, goddess never sleeping
Soon punished Strephon for his peeping;
His foul imagination links
Each Dame he sees with all her stinks:
And, if unsavory odors fly,
Conceives a lady standing by:
All women his description fits,
And both ideas jump like wits:
But vicious fancy coupled fast,
And still appearing in contrast.
I pity wretched Strephon blind
To all the charms of female kind;
Should I the queen of love refuse,
Because she rose from stinking ooze?
To him that looks behind the scene,
Satira’s but some pocky queen.
When Celia in her glory shows,
If Strephon would but stop his nose
(Who now so impiously blasphemes
Her ointments, daubs, and paints and creams,
Her washes, slops, and every clout,
With which he makes so foul a rout)
He soon would learn to think like me,
And bless his ravished sight to see
Such order from confusion sprung,
Such gaudy tulips raised from dung.

Norc wrote:well as i mentioned earlier... as long as it you keep it to yourself.

That doesn't sound much in the spirit of sharing.

Norc wrote:oh sorry. my bad. (i forgot i wrote the "imma stop".. don't read too much into these small comments of mine

i just got confused by that statement and thought it was an insult. i wasn't angry, just.. idk.. sharp. hope i didn't ruin your day or mood

I'm fine, don't worry. I guess we just misunderstood each other. (That might have happened before sometime..

It is true though, it might sound pathetic, but I do care what you think of me. So, I probably take comments from you a bit more to heart. That and I am completely exhausted (I can't be getting enough sleep) and I have a cold. I guess I'm wearing my feelings on my sleeve a bit these days. I'll try to not take things so much to heart.

Smartphones have made a lot of progress but they're still kinda gimped compared to desktops and laptops. But for casual web browsing and stuff smartphones have proven sufficient and that's all a lot of people are looking for from their digital devices.

Bungo !!! Loved it !
_________________
"All we have to decide is what to do with the time that is given to us. It's the job that's never started as takes longest to finish.”
"There are far, far, better things ahead than any we can leave behind"
If you always do what you have always done, you will always get what you always got

For you kids and your lurid photos. Print your nude selfies from your phone and then delete them from your phone. The NSA will still have them, but you'll have a hard copy that your friends won't see when they pick up your phone.

Norc wrote:well as i mentioned earlier... as long as it you keep it to yourself.

That doesn't sound much in the spirit of sharing.

i never said anything about sharing.

if it had been that easy i would've figured it out sooner... duh..

bungobaggins wrote:For you kids and your lurid photos. Print your nude selfies from your phone and then delete them from your phone. The NSA will still have them, but you'll have a hard copy that your friends won't see when they pick up your phone.

this is not a bad idea

i am a bit old fashioned that way, i love paper-pictures.

I think there will come a time when people realise that Things On Paper is a much safer and private option. and that goes for state secrets and rudey nudey photos. you cant hack into a paper archive from Azertakeyourcashstan, and 15 year old computer geeks can't raid your bank account if you keep your cash under the bed. 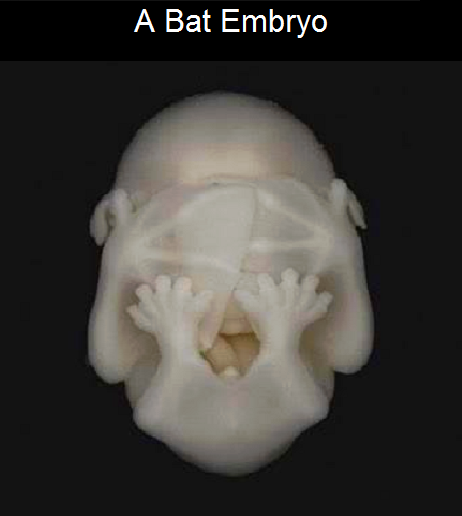 A bat embryo, kinda cute ?
_________________
"All we have to decide is what to do with the time that is given to us. It's the job that's never started as takes longest to finish.”
"There are far, far, better things ahead than any we can leave behind"
If you always do what you have always done, you will always get what you always got