I don't like the violence at the rallies, and I don't like that he was egging on supporters when protesters were present. I know Trump loves to play the crowd, he does it really well and it's part of his appeal. Although Trump has shown a more presidential side, but I wish he'd show it more, especially now that he's inching closer to the nomination. But what I've taken away so far from this election cycle is that if the Left doesn't get their way, and if they can't face a weak and docile GOP candidate who will roll over in November, they're going to throw the biggest hissy fit the civilized world has ever seen (already evidenced by blocking roads trying to prevent Trump supporters from attending rallies/constantly interrupting rallies/wearing KKK hoods to Trump rallies/rushing the stage putting themselves and Trump at risk of bodily harm). I'm not sure how many of these people are being funded by George Soros, but I know that a lot of these efforts have to be.

I'm not here to try to convince anyone to vote for Trump. Nor am I here to try to convince myself that supporting him is the right thing to do. All I've done for Trump is vote for him at the caucus, and I've come out to my family as a Trump supporter (and in the process I found out my dad liked Kasich, which took me by surprise). I just liked the op-ed and I wanted to share it. It doesn't portray Trump as the perfect candidate, and I definitely don't think he is, but if it's him or Hillary I'm all in for Trump. But if it's Hillary and someone the GOP props up at the convention then I'll go third party.

Protests from the left have a regrettable tendency to cross over from free speech into forms of hijack and vandalism. But once the first person got roughed up there's no stopping the protesters - they like the free media coverage as much as Trump.
_________________
Halfwise, son of Halfwit. Brother of Nitwit, son of Halfwit. Half brother of Figwit.
Then it gets complicated...

All I can ask is: where are the Trump supporters disrupting Hillary Clinton or Bernie Sanders rallies, and ultimately what does that say about those supporters attitudes towards free speech?

The people who are trying to prevent supporters (or even those who are just curious) from attending Trump rallies ultimately paint themselves (in my eyes) as people who are for free speech, but only when they agree with the content of the speech.

I really wish I could just tune all of this out. I have absolutely no power over what happens, and the power I do have in the general election is so minuscule it hardly matters. I went into this election cycle thinking I wouldn't get invested, and by now I just want to move on and not think about any of it anymore.

Heavy lies the crown
_________________
"All we have to decide is what to do with the time that is given to us. It's the job that's never started as takes longest to finish.”
"There are far, far, better things ahead than any we can leave behind"
If you always do what you have always done, you will always get what you always got

bungobaggins wrote:All I can ask is: where are the Trump supporters disrupting Hillary Clinton or Bernie Sanders rallies, and ultimately what does that say about those supporters attitudes towards free speech?

As it happens I have activist friends on both the far right (sagebrush rebellion) and far left (occupy), and all of them are much more concerned about getting their own message heard than about allowing other people to voice opposing opinions.

What all activists crave is media attention. That's what big signs and big clothing is all about - hoping to get 5 seconds camera time on the evening news. Getting arrested is often the goal, hoping to become a martyr for the cause.  Because of this, most public figures have gotten good at not giving them what they want. Getting them off camera with zero drama is the goal.

Trump has gone completely in the opposite direction, pointing them out in the crowd for the cameras to focus on, taunting them, having them hauled off publicly and giving the activists more camera-time than they'd ever dreamed of, and as a result activists are turning out for his rallies in record numbers. And in the process he and they have shared the headlines over and over.

Although I see a lot of different protest signs in the background of Trump rallies, it seems like Trump has singled out the "Bernie" signs. This makes a lot of sense to me if you consider Trump's background with professional wrestling.  No event sells better than a good ol' Grudge Match.

Edit: OK, here's an example that just popped up.
Turning in a US citizen to Immigration when you KNOW she's chained herself to a car hoping for an arrest and publicity....

Protesters from the Puente Human Rights Movement clogged up Shea Boulevard, a thoroughfare in Fountain Hills, Arizona, in a successful bid to block Republican presidential candidate Donald Trump supporters from attending a local rally on Saturday.

Three of the protestors — Michael Cassidy, Stephany Laughlin and Jacinta Gonzalez, all of whom are American citizens — were arrested after chaining themselves to cars. Of the three, only Gonzalez was handed to Immigration and Customs Enforcement. This was, she says, because of her last name.

A former Open Society Foundations organizer for the New Orleans Workers' Center for Racial Justice Congress of Day Laborers, Gonzalez recorded a video with a message to the world outside ICE headquarters after her release on Sunday morning.

"The two others were able to go home, but because of my last name I was questioned by ICE and transferred to their custody," Gonzalez said.

"We believe that [Trump] events have to be shut down, because the hate, the racism, the xenophobia, the Islamophobia, the homophobia that is spewed in those events is permeating America," she added.

Between today and Saturday we've got sort of a northwest libertarian block of states weighing in. Washington (me), Alaska, Idaho, and Utah. I think Bernie could make a good showing here. I'm rooting for him because I know he's always been an Independent at heart despite recently putting a (D) after his name. 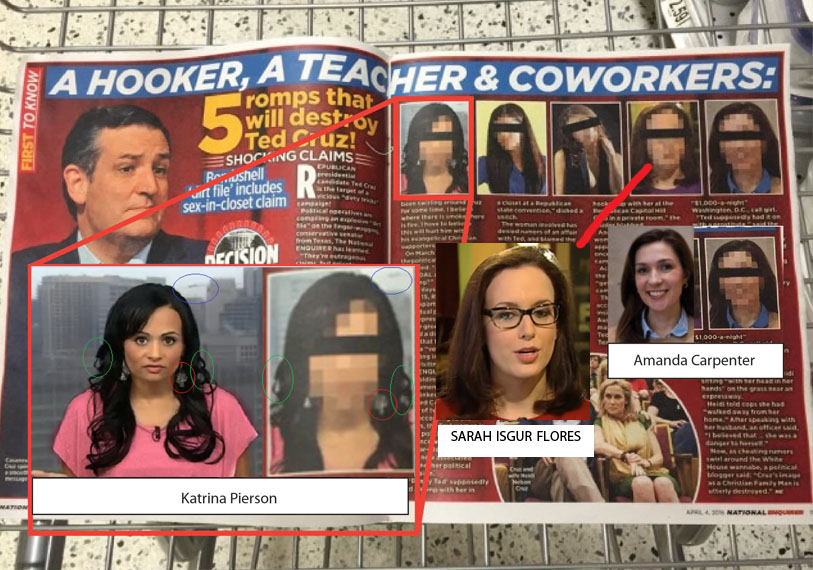 The first woman in that image, Katrina Pierson, who is part of the Trump campaign, has denied this on Twitter. Sarah Isgur Flores worked for Fiorina's campaign last year, however, when a pro-Cruz super PAC sent a pro-Fiorina super PAC $500,000 for no discernible reason.

And yes, I know it's the National Enquirer, but they were right about John Edwards and Tiger Woods so...

(And fwiw, the Pierson rumor was around before this story was published.)

Trump's response to accusations that he somehow gave this story to the Enquirer.

Donald Trump wrote:I have no idea whether or not the cover story about Ted Cruz in this week’s issue of the National Enquirer is true or not, but I had absolutely nothing to do with it, did not know about it, and have not, as yet, read it.

Likewise, I have nothing to do with the National Enquirer and unlike Lyin’ Ted Cruz I do not surround myself with political hacks and henchman and then pretend total innocence. Ted Cruz’s problem with the National Enquirer is his and his alone, and while they were right about O.J. Simpson, John Edwards, and many others, I certainly hope they are not right about Lyin’ Ted Cruz.

I look forward to spending the week in Wisconsin, winning the Republican nomination and ultimately the Presidency in order to Make America Great Again.

I'm trying not to get too hopeful about this one yet...but so far all the entertainment in this campaign hasn't relied on people making things up. If this pans out, the most entertaining campaign in history (or at least since Andrew Jackson) will turbocharge to a whole new level.
_________________
Halfwise, son of Halfwit. Brother of Nitwit, son of Halfwit. Half brother of Figwit.
Then it gets complicated...

You know why they call him Lyin' Ted? Because he holds the bible high, he puts it down, and then he lies. Lyin' Ted!

{{{{To answers Trumps question, no it doesnt make sense.
It implies that all those in need of help are snakes- a more realistic version would have been had the woman came upon 1000 animals in need of help, out of which 1 was a snake, but out of fear of the 1 she left all 1000 to die.}}}

Trump's insistence that the US is somehow more of a punchline without him is to be expected, but the fact that people believe him when the most cursory investigation will reveal the amount of international disbelief and mockery directed towards Trump is discouraging to say the least.

The Cruz sex scandal (aka Cuban Mistress Crisis) is just getting funnier and funnier. Internet detectives digging up that Cruz and alleged mistress No. 5 (Amanda Carpenter) got matching Winston Churchill temporary tattoos for the same April Fool's Day. Coincidence? Who the fuck knows, but I'm happy to see this shit show stay in the news. 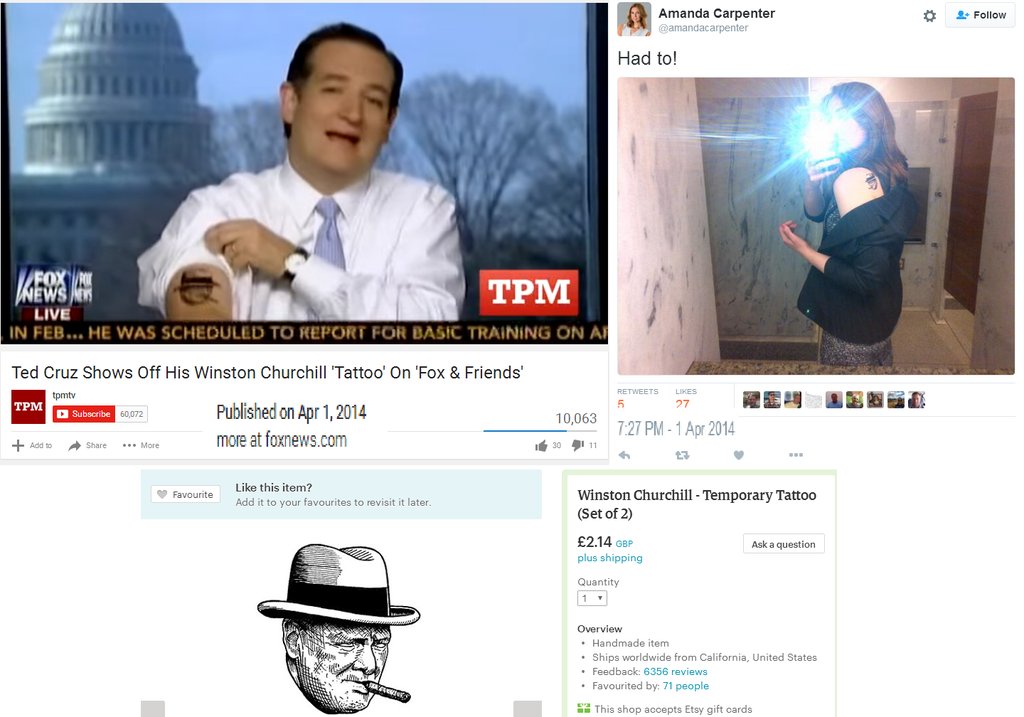 the most cursory investigation will reveal the amount of international disbelief and mockery directed towards Trump is discouraging to say the least.- Eldo

{{{This is from the Scottish leaders debate held the other night in the run up to the Scottish elections. The question was put President Trump phones you up- what do you say to him?- (sorry for poor quality only version I could find that wasn't whole debate- but does have subtitles that are only slightly dodgy to make up for poor sound)}}}

{{{Now you might think it doesn't really matter what a little country like Scotland thinks- but we are a US ally and member of NATO- right now the largest NATO exercise in history, which even includes allied non-NATO countries is underway off our coast, using our facilities, our refuelling, our airstrips, our training facilities in the Highlands and Islands and we house the UK nuclear arsenal which is in turn a part of the NATO nuclear arsenal. And Trumps reception by the UK government and opposition parties is no better.}}}}

{{{{and our UK intelligence agencies work very closely with US ones on international matters as our old colonial ties and commonwealth ties give us information the US does not have ready access too. What the US allies think of the President, how much they think they can trust him, his administration, his ability to control what he says in public, will all be crucial.}}}
_________________
Pure Publications, The Tower of Lore and the Former Admin's Office are Reasonably Proud to Present-

Cuban Mistress Crisis has apparently been sat on by media for at least two weeks, there is possibly a video?

Bill Clinton's response to all this:

the holier than thou types are always the most perverse in private.