But now Ringo and I are stuck with a slash ship attached to our names because of my weakness for puns.

yes. basically. it's all your fault

Ringdrotten wrote:I guess I owe you my thanks for saving my reputation, Eldo

the fanfitcion involving blue. i'll try and to it before november ends.. since its theme is "Movember"

I'm curious to see what Blue's fictionalized persona turns out like.

Ringdrotten wrote:I guess I owe you my thanks for saving my reputation, Eldo

I think we've both made our pretty well.

Eldorion wrote:I'm curious to see what Blue's fictionalized persona turns out like.

That seems a bit biased coming from the author, non.

Better get back behind the couch.

But chasing a cat through a labyrinth of pools on a slippery surface, all wet and covered in bathing oil was not the easiest task. On more than one occasion they found themselves sliding into walls and tripping into various pools. While running the whole area seemed to smoke up and steam seemed to leak from every crack.
“FUCK! What’s happening” Ringo yelled to Eldo as he tripped onto all fours and saw that he no longer could see the ground beneath him.
“I don’t kn-SPLASH“ Eldo said as he fell down a now invisible pool.
“what the flying FUCK” Ringo stopped and looked around. “where the bloody hell is that fucking cat?!”

Eldo emerged from the water with a loud gasp and a lot of spluttering. Luckily the pool was shallow, as hobbit pools are. As much as he adored the sea and wrangling and a good long soak in a bath, he still only knows how to swim in theory.

He gasped again, as Ringo suddenly was leaned over the edge of the pool staring him in the face. His pupils were impossibly wide and his nostrils flared.

The honeymoon was definitely over. Eldo had only seen drawings of Draugen, but the creature would also appear in some of Nora's long swears so he knew that BEING Draugen was a bad thing. There was nowhere to run, so Eldo did the only thing he could. He grabbed Ringo by the ears and shoved him head first into the cool water. He then stumbled backwards to the edge and climbed out.   Tumbling on all four with his front facing Ringo incase he was more resilient to the shock of going from steamy air to cool water, as the robust Fjordian that he was. His fingers found he had reached the edge of the neighbouring pool just as Ringo burst out of the water like a... well perhaps a Draug was fitting description. How did they go from dozing, via kissing to this? It was madness!

Ringo stared at Eldo, his usually bouncy and well groomed curls hang flat and soaked down in his face. Eldo pondered his retreat options, his best hope was to make Ringo tumble into the pool behind him.

- Eldo? Why are you looking at me like that? Where's the fucking cat?

Eldo let out a relieved sigh.
- Later buddy, I think we've been drugged or something. We need to get out of here and fast.

Ringo thought it best to focus on what he actually understood and implemented his fog maneuvering training from his army days. (Third best in his class, if you must know. One of his classmates was still unaccounted for to this day.)

They crawled on their hands and feet. Eldo kept his eyes to the ground and the soles of Ringo's feet, praying Ringo wouldn't go mental again. At last they managed to find the exit to the showers.  They found themselves in the girl's shower, the walls eerily covered with red writing - lipstick hopefully - reading variations of “I love Kate”, “Kate” and “etaK”. The decided to hurry out in the corridor and into the men's locker to retrieve their clothes, which fortunately lay untouched where they had left them. It wasn't until they were both dressed that Eldo dared to speak again.

- This has not been good for my hang over...
Ringo glanced around with suspicion.
- Think I've got a touch of that too now.. What in the name of Eru is happening?

Spoiler:
I ask myself the same thing.

ok. so it says "you are the draug/draugen! i can see it in your eyes" but it is funny because she has written it in the perfect dialect. the draug is a sort of sea monster very common in folk lore up here north, he rides half a boat and takes men who are lost at sea, like a devil

And of course I don't have time to read it right now.

Aweful photo of a bad sketch I made to accompany the chapter. Though I do like the cheeks. 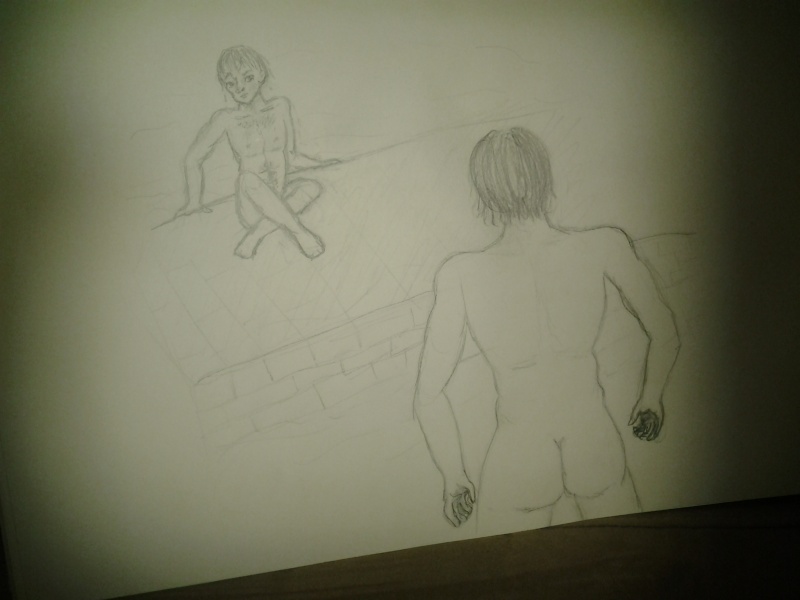 Well, I got around to reading it finally. The plot is certainly thickening.

And here was me wondering if those two would need some coherent legal advise in the near future.

Well, hopefully they will anyway.

I have been keeping an eye on this thread for a very long time, and I must say, after much consideration, much of what goes on here is hardly Family Friendly.

And the story is all the better for it I'd say.

I can do serious. Sometimes.

Then you don't have to sit 20 years from now and think what if.

I just don’t get the same feeling from the re-write as I did with the original, even with some alterations to the text. I’ll just let it simmer in the back of my mind a bit and see what happens.

But I have written something partly similar (I'm not really that versatile a writer) earlier which I don’t know if you have seen, Blue. It’s an idea that popped into my head after reading Eldo's " Nora's Birthday Surprise" and contains spoilers from the original "Needlehole mysteries". Even though those two series don't actually belong together at all.
(Have you read Eldo's stories yet? We need another voice in the "Eldo-we-want-new-chapters-and-we-want-then-yesteryear Choir.)

Yeah, do whatever feels right.

I have read that,

It's all rather great.