Yeah, there's that too.

(My quote is quoting the guy on the Sisters.

¨My lady?” Ned said at last. “You have a baseborn brother... Jon Snow?”
“He’s with the Night’s Watch on the Wall… How do you know about Jon?”
“He is my milk brother.”
“Brother?” Arya did not understand. “But you’re from Dorne. How could you and Jon be blood?”
“Milk brothers. Not blood. My lady mother had no milk when I was little, so Wylla had to nurse me.”
Arya was lost. “Who’s Wylla?”
“Jon Snow’s mother. He never told you? She’s served us for years and years. Since before I was born.”

'Cause no one really believes them.

The evidence for R+L=J is too strong and there's nothing but hearsay for these two (or Ashara Dayne).

Are you questioning the honour of House Deyne?

“Jon never knew his mother. Not even her name.”
Arya gave Ned a wary look. “You know her? Truly?” Is he making mock of me? “if you lie I’ll punch your face.”
“Wylla was my wetnurse,” he repeated solemnly. “I swear it on the honor of my House.”

I think I've found someone who likes Quentyn almost as much as me. 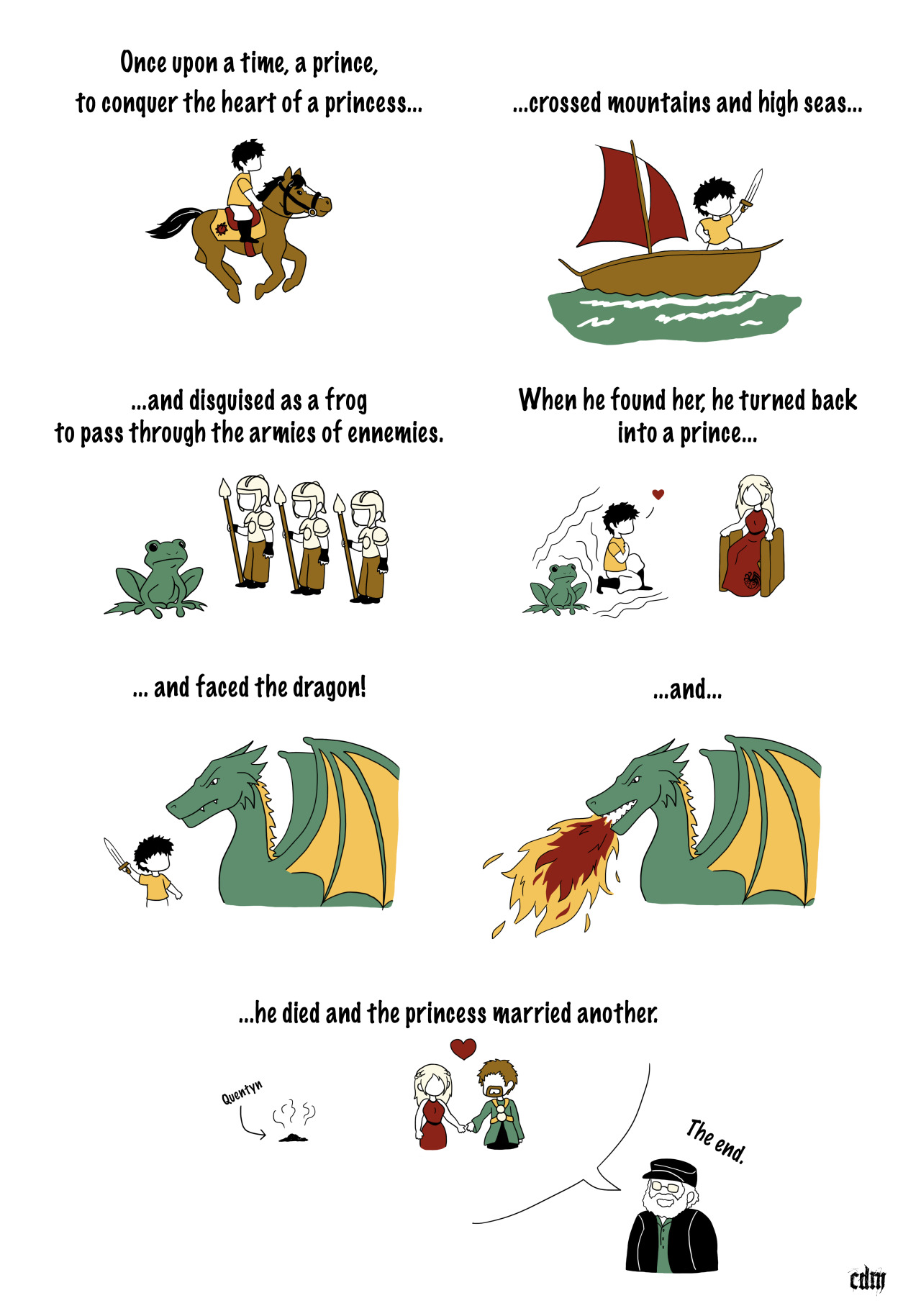 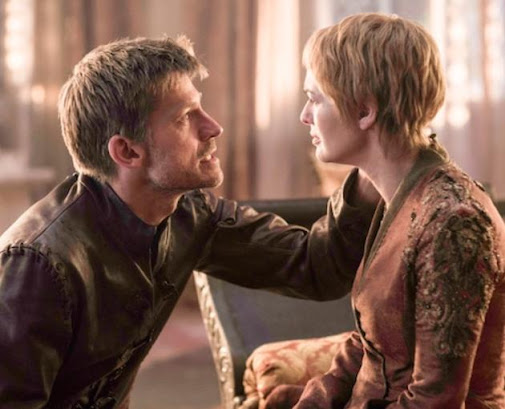 Ugh, the idiocy continues. Or so that image would suggest.

Spoiler:
That is to say, this is probably Jaime comforting Cersei about the loss of their daughter, now that she's been poisoned.

Last edited by Forest Shepherd on Fri Feb 12, 2016 1:34 am; edited 1 time in total
_________________
When I was younger
I would not have believed them
though a hundred had said it
and a thousand tongues had told
that I would sink to these ways
that I would fall on these days--
the days I have fallen on
the ways I have sunk into.

He can think of her as a brother now, not his sister.

God, I didn't realize Oberyn was such an asshole.

Then again i probably read those conversations a bit differently. Not that he isn't clearly a problematic character in some ways, and I agree with a lot of the general points.
_________________
“We're doomed,” he says, casually. “There's no question about that. But it's OK to be doomed because then you can just enjoy your life."

We tend to like people who exhibit principled selfishness. If Oberyn respects you, he'll do you the favor of a fair fight to take what he wants off you. If he likes you, he'll fight on your behalf. And he'll never be covertly manipulative: you know you can trust whatever he says because it's completely unfiltered.
_________________
Halfwise, son of Halfwit. Brother of Nitwit, son of Halfwit. Half brother of Figwit.
Then it gets complicated...

Bluebottle wrote:God, I didn't realize Oberyn was such an asshole.

Then again i probably read those conversations a bit differently. Not that he isn't clearly a problematic character in some ways, and I agree with a lot of the general points.

I, uh, am not really sure what to make of this article. How can anyone who has read the books once, much less multiple times, not have noticed that Oberyn is an asshole? The article is framed as a revelation of sorts, but like, all the quotes in there should jump out at the reader even on a first reading. Oberyn is not presented as a nice guy or a particularly compassionate person. And for all the talk about privilege there ... he's high nobility in a feudalistic society! Every single noble character in the entire series, including the all of the Starks, is "raised in privilege" and sometimes act in "problematic" ways towards their social inferiors. That's part of the fucking POINT of the series.

But, I mean, it's not like it's uncommon for people to cheer for unpleasant or immoral characters. Most popular works will have a significant minority of the fandom actively rooting for the bad guys to win. There's a reason why characters like Draco Malfoy are so popular, and the current age of the antihero that has taken over cable drama is founded on the fact that we like reading about bad guys. We as readers/audiences are for the most part capable of distinguishing between fiction and reality. Yet there seems to be an element of personal struggle and conflict in this essay. The following paragraphs are what really jumped out at me:

Well, I sometimes fear that Prince Oberyn Nymeros Martell is my Personal Favourite White Boy. I can see him acting like a jerk on page, I read the stories that are very problematic, yet I have said, on more than one occasion, that I think that he’s fundamentally a good person.

What the hell, me?

There’s something that’s very satisfying about reading characters who are funny, insightful, and intelligent, and Oberyn is all of these. Although his humour is generally against others, and his insight and intelligence is not always used constructively.

The thing is, I actually somewhat agree with this. I don't know if I'd go so far as to say that Oberyn is a fundamentally good person, but he certainly has plenty of good qualities, and that too is part of the reason he's so popular with readers. Having characters torn between good and bad is nothing new either. The only "revelation" I can see here, the only reason for a "what the hell, me?" is the idea that people who do not toe the PC line (I hate using this term but I can't think of a better one off the top of my head) can still be good people. Which should not be a revelation to anyone, but if this is the same person who runs the GOT Gifs and Musings tumblr page, then I suspect it might be to her, given the comments she's made about the people involved in making the show.

Bonus bit of tumblr hypocrisy: amidst the enumerations of Oberyn's various misdeeds, all of which are being judged by modern moral standards (which I'm not necessarily opposed to; it's the double standard that bothers me) we get this little gem:

I’m going to leave off the question of what a twelve or thirteen-year-old Oberyn was doing in a brothel knocking up a sex worker in the first place because, like, I can’t even, but nothing about this makes Oberyn look good at all.

So apparently being statutorily raped makes Oberyn not look good?

Now before anyone responds, yes, I know that the concept of statutory rape as we know it did not exist in medieval (or GOT) times. I know that Oberyn, even at 13, would have had the upper hand in any type of interaction with a prostitute by virtue of being nobility. But if you are going to axiomatically apply modern moral standards to actions that take place in a very different context and use them to judge whether a person is good or bad -- and again, I'm not arguing against doing this -- you cannot just throw out the fact that 12- and 13-year-olds are incapable of consenting to sex just because it's inconvenient to your rhetorical point.

I wouldn't be at all surprised if brothels of the time were filled with quite a selection of 14 year old girls. And if instead he was going for a 30 year old, I'd expect it would be because even at that young age he'd have enough sense of entitlement to pick out the most seasoned worker for himself.
_________________
Halfwise, son of Halfwit. Brother of Nitwit, son of Halfwit. Half brother of Figwit.
Then it gets complicated...

Reasonable points. I have no doubt that medieval and GOT brothels alike were full of minors and all sorts of horrific abuses. Not arguing against that at all.

Eldorion wrote:I, uh, am not really sure what to make of this article. How can anyone who has read the books once, much less multiple times, not have noticed that Oberyn is an asshole?

I was mostly going of his Tyrion conversations with that. I guess I just always read them in the light of some real respect being there, and as such didn't read asmuch into what Oberyn actually said. You can be quite harsh on someone and not mean it harshly at all.

The article, I think tries to take the premise of him being immidiately likeable and running with all the reasons that first impression might be problematic. (Not that I'm in any way dismissing any of your points.)

My take on Oberyn and Tyrion's relationship (though, admittedly, it's been a while since I've read the books) is that while Oberyn seems to have developed some respect for Tyrion by his death, he initially had almost as little regard for Tyrion as he did for the rest of the Lannisters, simply because of the family name.

Yeah, I guess I'm just not quite as on board with the acting like an asshole making you an asshole idea.

I do find the question of whether he acted the same around other people like he did around Tyrion interesting though. The article says he probably didn't around Tywinn, as Tywinn didn't consider him a threat. But I consider it might quite likely have been the opposite. Tywinn might not have considered a rash, brash and self-important prince as much of a threath as a cold calculating one like himself.

Blue, I'm getting close to book 4 in my current GoT re-read project, any chance you could post that "books 4+5 combined" thing again?

I could google it, but if you've tried it and found it worked as well as you say, I'd rather not risk finding a different setup if you get what I mean.
_________________
“The Lord is my shepherd. I shall not want for nothing. He makes me lie down in the green pastures. He greases up my head with oil. He gives me kung-fu in the face of my enemies. Amen”. - Tom Cullen

Bluebottle wrote:Yeah, I did it with the audiobooks, which is easier, but even with the physical copies you mostly stay with each book for a couple of chapters at a time except for at the start.

Also reading this way the scope of the story simply stuns you. Trust me, you never want to go back. (When it comes to the difference, it's the change from Cersei I to Tyrion I that really floors you. (It just seems so natural.))

I'm really interested to hear what you make of it.

Great, thanks! I'll be reading the books on my Kindle, so I don't think the switching will be any bother at all, it's quite easy and quick to go back and forth between books

Can't wait, you've got my expectations well up with all that talk

I might also add that I'm enjoying the series even more this time around, there are so many things I never noticed the first time, little details and hints everywhere. Still pretty fed up with Catelyn by the time she dies (her constant whining, understandable though it is) and skipping most Bran chapters up until they're beyond the wall, but the rest of it is just pure "leseglede"

I might have said it before, but I don't have like a memory card for my phone, so limited storage, and for a long time the only thing I had on there was the combined audiobook of aFfCs and aDwDs and I must have listened through it at least 4/5 times. And, yeah, I'm a real fan.

Project Combined Reading has officially commenced, very excited to see how this goes