And it came to pass that they were on the road and they met the young delightful mysterious Akubra Man - a Bard (of sorts). And on seeing them, he played a fond song.

"I wonder who that young delightful mysterious Akubra Man was [sigh]," Julia said.

"We will probably never know," Amarie said. "We may never know. [sigh]"

"I especially liked the bit about the knickers," Azriel said, happily. "I know exactly how that beautiful woman must feel. Wait a moment... ... ... Oh Eldo says he has a fair idea how she feels too."

And so, with these happy thoughts in mind, the beautiful young women went on in search of the next chapter - and Eldo's Ghost was content.

It could have been worst but it could have been better. Amarie had become decidedly prudish, Julia had not been confronted with even one "two ladies and Julia" joke, and Azriel's knickers were being haunted by a young and demure American ghost with good manners, however contradictory that may sound.

"What's that about I wonder?" Julia asked Amarie quietly. "I mean, is Eldo a Ringwraith now?"

"What ever do you mean, Julia?" Amarie asked in prudish shock.

"You stupid woman! I don't mean a Ringwraith in the way you think. I mean, as in a Tolkien Ringwraith."

"Oh dear, my mistake. Are you referring to all that sniffing business."

"Yes, I always wondered why a Ringwraith would have a nose."

"It doesn't bear thinking about."

"No, I guess not. My goodness! I do believe the trees are thinning... Is that Erebor before us?"

"And the Great Lake?"

"My Gawd. I think you're right. At last we're free of Murkwood. How many Chapters has it been since we entered this rather ridiculous forest?"

"It's hard to say with all the stupid Chapter Numbering."

"Will you just shut it," Julia groaned. "Pull up your knickers and shut the fuck up."

"Is this one of those moments when you're considering gripping my knickers and throwing them away as prefigured in an earlier Chapter?" Azriel quailed.

"Yes it is," Julia snarled.

"And stop quailing, Azriel. You know, it's really out of character."

"Shut it, I said. I don't give a flying fuck what your Knickerghost says. If he wants to quail, let him do it himself. As I said, it doesn't suit you Azriel!"

"Oh... you're right you know," her crazy Sister said thoughtfully. "Strange to say, but I have been feeling funny ever since he started haunting my knickers."

"Well, perhaps you should forget your angst and throw him away."

"But, don't you see, it's my knickers that are haunted."

"Just the pair you're wearing?"

"Then you must go knickerless for a time - like you did at the Rugby World Cup last year - and free yourself from his annoying habituation," Amarie cried suddenly. "Exorcise yourself, Azriel!"

"What. Push ups and knee presses"?"

"No, you idiot," Amarie sighed audibly, forgetting her Eruvian patience for a moment. But she quickly caught herself. "Oh dear dear, Sister. You must call on Eru to give you the strengh to throw your knickers away."

"But I've become accustomed to my ghost?"

"What! Don't tell me you like the spirit of some murdered young man whistling in your undies?" Julia demanded to know.

"I haven't whistled once," Eldo's Ghost broke in on his dignity. "As if I'd whistle in a lady's knickers."

"Put him away,"  Julia told Azriel severely.  "Or I will grip your knickers! I will. I mean it!"

"And don't start being dutiful either, Azriel," Julia complained. "That horrid ghost is having a most horribly polite influence on your knickers, did you know that?"

"Sorry. I'll try to keep him in toe in future."

"And don't you dare use that as an opportunity for camel toe jokes, Narrator"!" Julia said firmly.

"The sooner we free ourselves from this forest the better," Amarie sighed. "Quickly now. I wish to smell the scent of fresh open grasslands again. Let's run before some other embarrassing catrastrophe occurs!"

And so the beautiful young women hitched up their dresses and bolted like gazelles. And so quickly did they run, Eldo's Ghost was forced to cling on for dear life, for not only did he have Ringwraith-like nostrils, he had fingers as well, and very tickly fingers to judge from Azriel's giggles.

This tale definitely has a Gothic aspect.

I dont know what to say ! Good job I spose Im not wearing a thong ?
_________________
"All we have to decide is what to do with the time that is given to us. It's the job that's never started as takes longest to finish.”
"There are far, far, better things ahead than any we can leave behind"
If you always do what you have always done, you will always get what you always got

Things happened incredibly quickly after that.

The three beautiful young women went to the Wicked Witch of the West's castle in Dale and threw a bucket of water on her. Amazingly, this simple act broke the spell on Azriel's knickers and Eldo's Ghost was forced to live in herring oil jar, Amarie lost some of her prudishness, but not all of it, and Julia (eventually) became a Game Show Host, and the Wicked Witch of the West was dead. It all made sense in a way (apparently).

They then caught an eagle back to Odo Banks and whatever contract they had had with him - and I can't remember what it was now - was fulfilled.

The three beautiful young women were soon sitting on the lawn where it had all begun.

"From now on I shall spend more time studying mathematics and less staring at the cute bottoms of actors," Amarie said putting on her reading glasses. "For a good education for women must be a superior choice to spending one's life having sex with the Richard Cucumberback's of this world."

And the other two could but agree. As you see, they were very much changed by their experiences.

Especially Amarie, as can be seen in the photograph below. 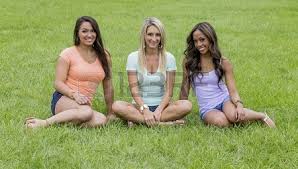