The first one has multiple images of Bombadil.  Most drawings of Tom I disagree with, but the below match my mental picture of him best: 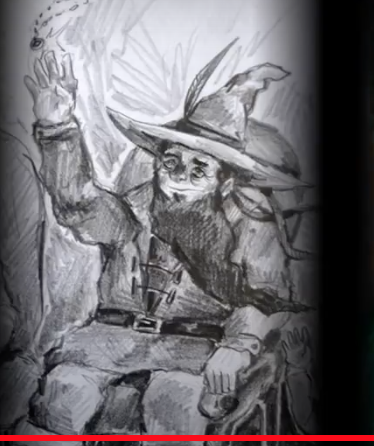 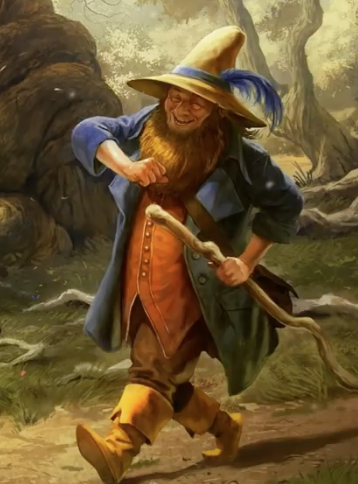 Yep, according to the late text Of Dwarves And Men anyway, Tolkien also noting that he wandered widely after awakening, for example.

According to Appendix A, Durin "slept alone, until in the deeps of time and the awakening of that people he came to Azanulbizar, and in the caves above Kheled-zaram in the east of the Misty Mountains he made his dwelling . . ."
_________________
Itaril-y bad idea -- Mrs Figg

On the maps: no Himling, no Tol Fuin in my opinion.

that last video brings up the question: if the Noldor came from Valinor with no experience of war, how could they have so easily defeated the first orc armies they met? So what if they "have the light of the trees in their eyes", they still haven't so much as punched anyone except the Teleri who equally had no weapons or battle experience.
_________________
Halfwise, son of Halfwit. Brother of Nitwit, son of Halfwit. Half brother of Figwit.
Then it gets complicated...

We know Galadriel took part in "athletic feats" in Aman, and Tolkien noted the following against section 97 of The Annals of Aman:

"No! They must have had weapons on the Great Journey."

According to one text anyway, the Elves had already used spears and bows (weapons of the chase), but JRRT ultimately went further here -- in the Later Quenta Silmarillion II, section 52A, he introduces gifts of weapons for the Quendi in Middle-earth -- for the evils in Middle-earth, and for the defense of the Eldar upon the Great March.

Christopher Tolkien did not take up this revision for the constructed Silmarillion.

Concerning the video, in my opinion it's a bit drawn out to basically raise two major points of argument: Fingolfin and Tree Light.

I don't love the "Fingolfin argument" (which I've seen before). This battle with Morgoth leads the narrator to say he is one hundred percent sure that no Elf in the Third Age, possibly even the Second, could match such a feat, and then he goes on to compare Gil-galad versus Sauron, and ultimately employs the phrase "super Elves" for the Exiles.

Am I arguing with me? Or with a "potential" measure here? Maybe. But for me -- and no doubt Fingolfin was a great warrior (and see below about the youth of the Eldar and the Light of the Trees) -- each battle is different, and in my opinion (warning: multiple f-sounds ahead) there is a "feyness" to Fingolfin in this famous encounter, providing a helpful factor -- at least as far as how well he did in the fight.


What does Pippin felling a troll, and/or (Andor?) Sam defeating Shelob say about the strength, martial prowess, or strength of will, of Third Age Hobbits?

Crossing the Grinding Ice: " . . . for they were a mighty people, the elder children undying of Eru Iluvatar, but new-come from the Blessed Realm, and not yet weary with the weariness of Earth . . ."

The Etyangoldi: "The Noldor, outnumbered and taken at unawares, were yet swiftly victorious; for the light of Aman was not yet dimmed in their eyes, and they were strong and swift, and deadly in anger, and their swords were long and terrible."

Poetic as these are, I think there is an implied measure of power here -- related to being "new-come" from Aman, the light of the Trees, and being "younger" -- which could translate into strength/endurance in martial prowess. I like that the Sindar even called the Noldor Lechind "Flame-eyed".

Okay I love it rather.

What's the actual measure for comparison to later ages?

I guess I just think this video could open up a "gap too far", which is arguably pretty pedantic of me . . .

We come to a complication. Though I can accept that future generations of elves may be weaker than the first (or second) generation, creatures cursed with immortality (as men are contrarywise gifted) can't be getting weaker with age. They can only learn and thus become more fearsome with age.

According to the big picture, the Elves are destined to "fade" bodily -- in Middle-earth.

But if we look at Tolkien's description of Legolas: "He was tall as a young tree, lithe, immensely strong, able swiftly to draw a great war-bow and shoot down a Nazgûl, endowed with the tremendous vitality of Elvish bodies, . . ."

We aren't there yet.

At least with Legolas and seemingly other elvish bodies

Tol Morwen is the one Isle here that has a post Lord of the Rings reference, compared to Tol Fuin and "Himling" which do not; and as I said earlier, I don't believe these latter two existed internally.

"... nor ever thrown down, not though the Sea should drown all the land. As indeed after befell, and still the Tol Morwen stands alone in the water beyond the new coasts that were made in the days of the wrath of the Valar. But Húrin does not lie there, for his doom drove him on, ..."

JRRT The Wanderings of Húrin (see also the Constructed Silmarillion)

Another odd thing about "Himling" is that this was the earlier name for the hill, and the old map with these two isles had this form. The later name for the hill is Himring of course -- so in my opinion, here we have an internal detail resulting from an external factor. In other words, even if the Isle exists (again I argue it doesn't) it arguably should be called Himring in any case.

Pronunciation note for the video: if one is going to employ the form Maedhros, the -th- sound is voiced as in "then" (not as in "thing").