My sympathies to the Vikings. Not the result I was hoping for. Best of luck next year! (That's the thought I'm clinging to for the Ravens and the Cowboys too.

Might have to get a day off to watch the game again!

{That's what's cool to say these days right?}
_________________
When I was younger
I would not have believed them
though a hundred had said it
and a thousand tongues had told
that I would sink to these ways
that I would fall on these days--
the days I have fallen on
the ways I have sunk into.

The Evil Empire is defeated!

There are fireworks going off here in Maryland.

We just called my stepbrother who's at Temple and apparently Philly hasn't started burning yet but is very loud.

An atrocious defensive game (most total yards in any NFL game, regular or postseason

) but it was more or less decided by a strip sack (the only sack of the game). What an ending. Good Super Bowl all in all.

aaaaand there it is:

Update: more people tried jumping off that canopy and then this happened...

As a Cowboys fan I can't cheer for the Eagles too much but you've gotta be happy for a city whose long championship drought just ended, plus seeing a dynasty-stopper.

I mean, the Pats will obviously still be contenders next season but it'll be interesting to see where they go a few years down the line with Brady being in his 40s and them having traded away Jimmy G.

Reportedly the Philadelphia police preemptively greased light poles around the city to stop people from climbing them but Philly fans, not to be denied a chance to live up to their reputation, decided to start pulling them down instead.

Closest thing we have to European-style football hooligans.

Edit: in fairness, there have been more positive scenes too.

I'll refrain from posting the video of the Philly fan literally eating horseshit (from a police horse) off the ground.

NBC's Olympics coverage sucks as usual and their streaming service is frustrating so I've been looking for highlights on YouTube too, but it's fun watching the short track highlights so far. That's been my favorite winter sport since Salt Lake City 2002, which were the first Olympics I have any memory of. That got me interested in ice skating for a number of years; everyone else I knew had figure skates or hockey skates but I had a pair of speed skates, and there was a while when my mom and I regularly woke up at 5am to drive an hour to the closest speed skating lessons for kids my age.

There have been a number of wipeouts so far and at least one person got kicked in the face by a skate, but there's a lot of really good skating too of course. South Korea is really strong in it which means there are a lot highlights making their way onto YouTube, albeit titled in Korean so I'm relying mostly on related videos rather than searching.

It is normal that the host state has a resurgence during these events. Just look at the UK, their athletes were a national joke for decades, then the London olympics come around and they win across the board. This has lead people to say that the host state is given a certain leniency *coug-cough* in certain regards. The UK example is certainly a good one.

This year they moved the Olympic coverage to the Norwegian Discovery affiliate, which has lead to the procedings being unavailable for me, and I guess many others. Traditionally it was always on public television.

Cross country skiing is the major event in Norway, everything else has become somewhat secondary. Biathlon, ski-jumping etc. are still important though. Long track ice skating has been a major norwegian tradition, but has grown less popular with the years. (Also, the dutch always win, so where is the fun in that.

The NYT did this, not very comprehensive, list of the various important diciplines in the various countries:

Homefield advantage is definitely a thing but South Korea has been really strong in short track speed skating since its inception at the Olympics. Their women's relay team coming back from an early crash to to not only win their semifinal today but set an Olympic record (albeit one that was broken by China in the subsequent semifinal) was nothing short of amazing.

They make a good point about star athletes being drivers of interest in certain sports. Apollo Ohno certainly played a big role in my interest in short track. I was somewhat aware of Japan's interest in figure skating and I thought it was great that some of their pairs skaters skated to music from Yuri on Ice (an anime series).

When your Trump Derangement Syndrome is so strong that you become an arm of the North Korean propaganda machine. 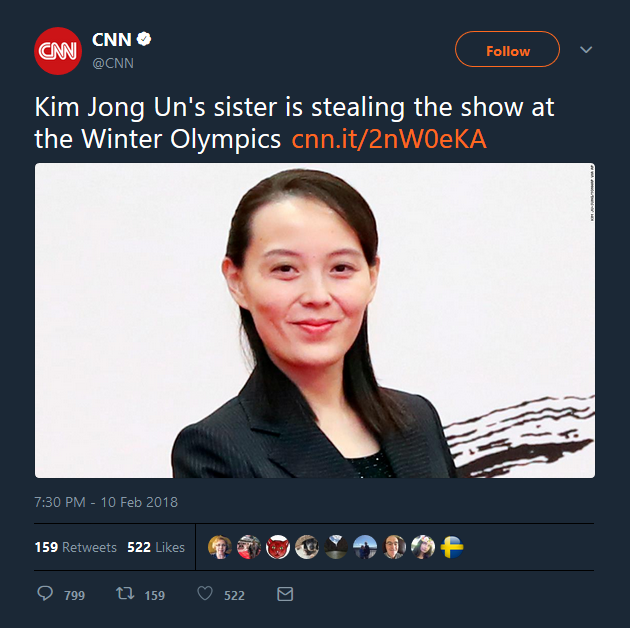 I didn't watch much of the Sochi Games so this is my first time seeing snowboarding slopestyle and it's pretty amazing (as is the skiing version).

Lord but she's graceful. What was up with that transition from smiles into near crying at the end? I have to assume she got a raucous ovation that overwhelmed her.
_________________
Halfwise, son of Halfwit. Brother of Nitwit, son of Halfwit. Half brother of Figwit.
Then it gets complicated...

Since I was up really late/early again I watched today's short track events live. They were fun, lots of crashes as usual and a number of disqualifications, some of which have apparently proven very controversial on social media. I'm brushing up on the rules as I go though so I don't have much of an opinion on the fairness of each call. Lots of great skating to watch though, definitely.

Snowboarding's evolution has been especially fast, probably because it's relatively young. It's first Olympic appearance was Nagano 1998:

Shaun White was a big factor in kicking the sport up to the next gear after he won the gold in Torino 2006:

But the field as a whole has advanced so far that this is now what qualifying events look like:

The men's halfpipe final was held in the late morning Korean time so I was able to watch it live in primetime here on the East Coast last night. NBC being NBC cut away to commercial very frequently but they did show all the runs by the main contenders. I can't find a full video of Ayumu Hirano's second run [EDIT: actually it's on NBC's Twitter], which was phenomenal, but Shaun White's final run was a sublime thing of beauty.

I'm glad to see him go out on top, but I also can't wait to see where this crazy sport goes by the time we get to Beijing 2022. Though implementing a concussion protocol would probably be a good idea, as some riders are apparently now advocating for.

On the other hand I watched a little bit of doubles luge out of curiosity since I'd never heard of it before and it was kinda too comical-looking for me to take seriously.

I mean, regular luge already looks kinda goofy, though I have no doubt it takes a lot of skill to succeed at the highest level. But with doubles, the image of two guys on the little sled with one lying on top of the other was just kinda ...

Possibly unfair of me but oh well.

I think it attracts a similar type of audience, though perhaps skewed in a rather different direction,  to those that watch beach volleyball.

Or perhaps in a different vein, you turn on the telly expecting to watch the Olympics, rub your eyes and mutter "what the fuck??", then find yourself strangely unable to turn away.
_________________
Halfwise, son of Halfwit. Brother of Nitwit, son of Halfwit. Half brother of Figwit.
Then it gets complicated...

Norway is dominating the medal count, and it's time somebody did something about it - Yahoo! Sports

Similar topics
» Things to Do Besides Eat:
» Good things can happen when you're taking out the garbage.
» Anyone goood with making things from fiberglass?
» Weird Things
» Fun Sailor Moon Things to do!!